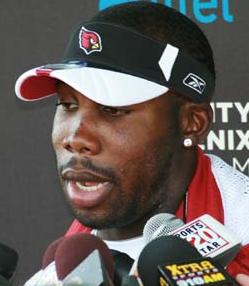 Anquan Boldin met with the press after practice today to update everyone on his condition and talk about his avaliability for this weekends game for the Arizona Cardinals. He nor Coach Whisenhunt would go into much detail about the prospects of him being able to play but they did say that he's got some tests to undergo this week. The results of those tests will play a big role in deciding if he can suit up on Sunday. Boldin reportably looked and sounded normal outside of his cheek looking slightly swollen. He did confirm that he has a fracture near his sinus.

Obviously the biggest concern will be the state of Boldin's head and any lingering effects that being knocked out will have, but if he's cleared by the head-doctor (for lack of the appropriate term), I would bet that he'll play with the fracture. I don't any high level of football experience (my skills were limited to JR high and high school ball), but I have played with a broken nose, so there's a good chance that Boldin could as well.

So what do you think? Anyone think he'll suit up or is such a long shot that we should just accept that he'll be out at least a week?