The special teams units were a big question mark coming into the season but for this one game, they were the best unit on the field. The special teams units were directly responsible for 16 points of the Cardinals 30 points, including the first and final points of the game. There were also some interesting, if not questionable decisions made by the coaching staff that are worth looking at as well. 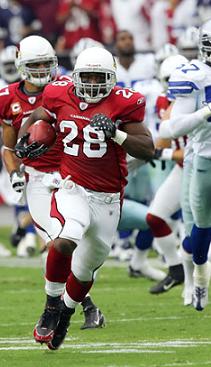 his only field goal coming from 41 yards out. His field goal percentage is up to  80% on the season (8 of 10) but the real story on Racker's game came on kickoffs. He had six kickoffs total and included in those kicks was a pooch kick and a failed onside attempt. His overall kickoff stats (18 yd return avg) are skewed by those to kicks but his 'true-kickoffs' were productive. Rackers isn't getting as many touchbacks as he has in years past but his kicks are still getting to the goal line or into the end zone. Of his four deep kicks, two of them were into the end zone and the other two were fielded at the one. The Cardinals continue to attempt at least one pooch kick a game and it's tough to tell whether they're trying to catch opposing teams off guard or if they don't fully trust the coverage units.They also attempted another onside kick, but Rackers didn't get the bounce that he needed. He also had another tackle this week when he brought down Miles Austin at the 33 yard line. Grade: A

Dirk Johnson: Johnson had another solid game even though his overall stats weren't eye popping (39.2 avg). He pinned the Cowboys at their own nine once and dropped three punts right around the 20. His overall average was dragged down by two short punts (34 and 30 yards) but those two punts resulted in the Cowboys starting at their own nine yard line and at their 20. He's still performing below league average in both average (29th) and net average (21st) but he has shown a pretty good ability to pin the opponent inside their own 20 (7 times in 18 punts). Grade: B+

Kick Return: Two weeks ago, the Cardinals needed a spark in the kick return department and JJ Arrington has provided exactly that. He only had one kickoff return against the Cowboys but we all know how that one turned out and the Cowboys  stayed away from him the rest of the game. The rest of their kickoffs included two pooch kicks and a kick out of bounds. If Arrington can continue to strike fear in the opposition, the Cardinals offense will be at a huge advantage with great starting field position. The first pooch kick by the Cowboys was muffed by Calais Campbell but Dallas blew their chance to capitalize on it when they missed a field goal. I would hope that Campbell's days on kickoff return are finished though because he certainly didn't look like a guy who was capable of fielding a kick anytime in the near future. Grade: B+ 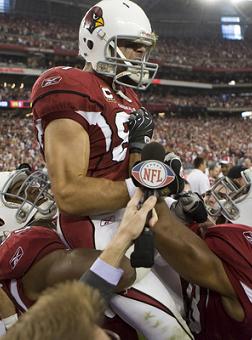 Punt Return: Steve Breaston continues to be impressive on punt returns and his game was better than his stats (9 avg) would indicate. Three of his returns were for 13 yards or more but his overall numbers were dragged down by a one yard return. One problem that the Cardinals have got to get ironed out are the penalties on punt returns. They had another one this week, an illegal block above the waist by Doucet that moved the offense from their 35 to their own 21. Of course the best and most important punt return went for two yards, when Sean Morey completely blew up the punter and Monty Beisel tumbled into the end zone. Morey, the special teams captain, came through the line unblocked and almost ended up over running over the punter before he even started to kick. Grade: A+

Overall the special teams was truly special this week and with young, explosive guys (Breaston and Arrington) mixed in with savvy veterans (Morey and Beisel) there's no reason to think that they can't be a dangerous unit on a weekly basis. Thoughts? Agree/Disagree?