The Arizona Cardinals' draft was all about taking the best player available and in the 3rd round that guy was Early Doucet. Doucet had a solid career at LSU but his draft stock was hurt when groin injury plagued him his entire senior season. Doucet was billed as an Anquan Boldin-clone given their history (former quarterbacks), size (6'1 217 vs. 6'0 211), lack of speed and style of play. We even 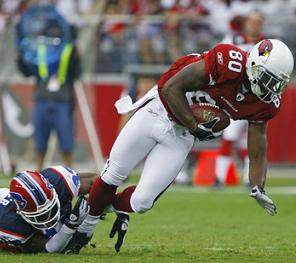 learned after the draft that Doucet contacted Boldin before his senior season because he thought Boldin was similar enough to give him some advice.

Doucet was in the running for the third receiver job with Steve Breaston but a hamstring injury kept him out of most of preseason. By the time Doucet returned for the third preseason game Steve Breaston had secured the job and Doucet had fallen all the way to fifth on the depth chart. He did finally get his chance to make an impact the past two games with Boldin on the sidelines though. Doucet had a pretty impressive first game with six receptions for 42 yards and he followed it up with a catch for three yards against the Cowboys. A positive for Doucet is that when he did play against the Bills and Cowboys, it looked like he was the fourth receiver over Jerheme Urban. Doucet will have to be more versatile on special teams if he wants to be active on game days once Boldin comes back. Urban has been active because he's able to play on several special teams units. To this point we've seen Doucet show that he's got good hands and that he can be a reliable possession receiver. You'd still like to see some run after the catch abilities but with such a small sample size, it's hard to come to any conclusions.

Time will tell if Early Doucet really has Boldin-like abilities but for now he's buried on the depth chart behind three very solid, if not down right amazing, receivers. His hamstring injury in training camp slowed his development but he's still a promising young player who should become a bigger part of the team as the season progresses. Thoughts? What were your expectations before the season and how have they changed through six weeks?