Share All sharing options for: Bills At Arizona Cardinals: Know Thy Enemy Edition

The Arizona Cardinals know quite a bit about stand out linebackers in their second season, considering that they've faced Patrick Willis three times so far in his career. They'll get a taste of another great, young linebacker on Sunday when Paul Posluszny takes the field. Posluszny was the Butkus 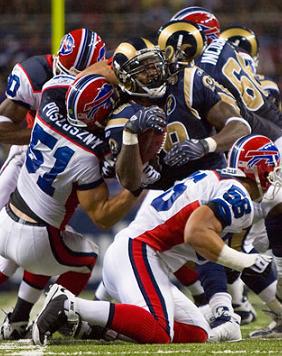 Award winner (top LB in the nation) his senior season and came out of Penn State with great instincts, a nose for the ball and speed that couldn't be measured with a stop watch. There was some question about his ability to shed blockers at the NFL level but that didn't stop him from getting off to a very quick start his rookie season (26 tackles in 2 1/2 games) before breaking his forearm during the third game of the season. While he hasn't been quite the tackling machine (although 26 tackles in 4 games is nothing to be ashamed of) during 2008, he's taking on bigger role in the Bills defense. He's broken up three passes through four games and he's been much more involved in blitz packages.

Posluszny doesn't make his living with big hits or flashy plays but he does always seem to be around the football and he's already known for his ability to lead the defense to bigger and better things. One of the areas that he's been noticeably improved at this season is pass coverage and any time Warner looks to throw to the middle of the field, he'll have to find "Pos" before he releases the ball. The Cardinals could try to exploit Posluszny's weakness by running directly at him since he has times shedding blockers at times but the Bills picked up Marcus Stroud to consume blocker and allow "Pos" to run free. Stroud is another big defensive tackle who Sendlein or Lutui will have trouble containing by themselves. It'll have to be a joint effort with one of the two slipping off to pick up Posluszny.

Here's what Buffalo Rumblings' Brian Galliford had to say about Posluszny (after the jump):

Paul Posluszny is a fan favorite for a reason - he embodies what Buffalo is all about.  He's immensely talented, a fierce competitor, and his work ethic meshes well with the blue-collar city whose football team employs him.  He is effectively the quarterback of Buffalo's defense, responsible for getting his teammates lined up correctly and playing at proper leverages.  He's been nearly flawless in his execution.  People tend to forget that when he takes the field in Arizona, he'll be making his eighth professional start.  The progress that he's made, coupled with the fact that he fits in perfectly with the rest of Buffalo's defensive personnel in terms of skill set and competitive nature, has turned Poz into one of Buffalo's brightest young stars.

His arm injury last year made him a "late bloomer", so to speak, but Poz is the second of three pieces in what has already been a productive 2007 draft class for Buffalo.  In time, this draft class could turn out to be one of the most important in the history of the franchise; landing Marshawn Lynch, Paul Posluszny and Trent Edwards in the first three rounds will do that for you.

Posluszny isn't a Pro Bowl caliber linebacker in the AFC yet but he's linebacker who is very capable of disrupting an offense and shutting down the opposing running game. He's got  a good defensive line in front of him who can allow him to flow from sideline to sideline without getting swallowed by offensive linemen. He's athletic enough to get deep into his drops in pass coverage and can run with most tight ends. He may not be Ray Lewis or even Patrick Willis, yet, but he's a young, talented linebacker who must be accounted for on every play. Thoughts? Anyone worried about how our running game stacks up against the front seven of Buffalo?