While the Arizona Cardinals 2nd ranked passing attack against the Carolina Panthers 2nd ranked pass defense will get most of the headlines this week, I've got to start this week's game previews by talking about the Cardinals defense. The defense has had their ups (pass rush and run D) and downs (big plays) this season and they'll be tested this week by a balanced but very dangerous group of weapons. The Panthers rushing offense isn't necessarily prolific (114 ypg, 15th in NFL) but they do have two guys who can carry the rock and be very productive. The passing offense doesn't get much pub (210 ypg, 16th in NFL), but that doesn't mean that they should be overlooked by any means. They're very good at breaking off big gains (21 pass plays of 20+ yards) and Jake Delhomme is the kind of QB who rarely beats himself. Here's a look at some selected Panthers who will play a big role on Sunday:

Can Take Over the Game

Running Back Duo: The duo of DeAngelo Williams and Jonathan Stewart isn't overly flashy but they are good compliments to each other and pretty productive. They're 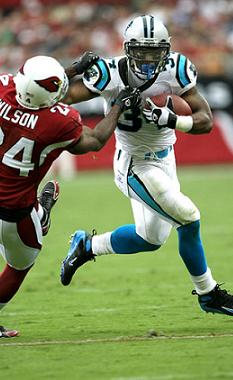 not your typical 'thunder and lightening' duo b/c they both have some power and speed to their games. Williams is a bit smaller and quicker while Stewart has a bit more size and power but they both possess the ability to run over or around defenders. Williams gets slightly more carries (103 to 88) but they both average 4.0 yards per. One interesting aspect of their seasons to date is that, at least for the most part, they either both have good games or both have bad games. Together they've averaged 137 yards per game in five Panthers' victories and just 40.5 yards per game in two Panthers' losses.

Steve Smith: Smith started the season suspended by the team for two games but since he's been back he's gotten better each week. He's had at least six receptions the past four games and has averaged 106 yards per game over that stretch. A couple of things that jumped out at me while looking at his stats so far this year, of his 28 receptions, 14 of them have come in the 2nd quarter this season. He also hasn't caught a pass inside the red zone this year and he's not a huge factor on third downs either where he's only caught 6 passes (vs. 22 on first and second down). Overall, we all know that Smith is a dangerous receiver but he does seem to have a niche area where he's more valuable.

Keep an Eye On

Muhsin Muhammad: Muhammad's been up and down this season with game highs of 8 for 147 and game lows of three for 25, but in total he's having a solid season. He's on pace for 73 receptions for just over 1,000 yards, which would be his best season since 2004 (his last season in Carolina). Muhammad uses his size, instead of speed like Smith, to create mismatches. He's consistent enough to have his receptions spread evenly over first, second and third downs, but oddly enough he's not much of a red zone factor either with three receptions and zero touchdowns. Muhammad isn't the knockout blow that Steve Smith is but he's the body shots that can wear down a defense.

Jake Delhomme: Delhomme's stats are overly impressive but he's consistent quarterback who rarely puts the defense behind the eight ball. His stat line of 59.1% completion percentage, 7.55 ypa, seven TDs, 5 picks and an 84.0 QB rating isn't great but he gets the job done and the offense does depend on him moving the ball. In Panthers' victories he completes over 60% of his passes and has thrown all seven TDs versus just two interceptions. He's also much better at home where he's completed over 63% of his passes, thrown six TDs, two picks and has a QB rating over 100. Delhomme isn't a guy who's going to single-handily win games very often but if he plays within himself he's good enough to take pressure off the running game and defense.

Thoughts? Who worries you the most?