Arizona Cardinals One Win From Legitimacy

Share All sharing options for: Arizona Cardinals One Win From Legitimacy

Success has never come easy for the Chicago/St. Louis/Phoenix/Arizona Cardinals, much less sustained success. For most of our lives, this franchise has been mired in medocrity, or worse, with 22 non-winning seasons since 1985. Sunday at Bank of America stadium in Charolette, North Carolina the Cardinals have a chance to establish themselves as a contender. Back to back to back wins over Buffalo, Dallas and Carolina would put the rest of the league on notice that the Arizona Cardinals are a team to be taken seriously. What would a big road win do to this franchise? 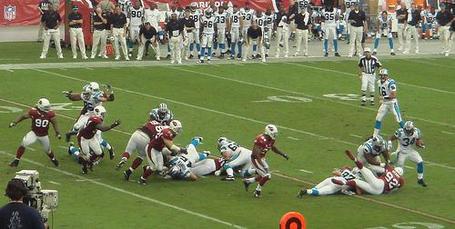 Road Warriors: It's been a big year for west coast teams traveling east and we've all heard that the teams are 0-10 or 0-12 or whatever. We all know that the Cardinals have always been terrible on the road, but does that mean that they don't have a chance? Of course not, this team has the weapons to put points on the board and the defense to get after the quarterback. A road win over a quality opponent could end up being bigger than last week's win over the Cowboys.

Division by the Throat: The rest of the NFC West is struggling but the Cardinals still have just a two game lead right now. The Rams are headed to New England and the Niners will host the Seahawks. It's possible that a Cardinals win coupled with a Rams and Niners loss would open the lead up to three games. The Cardinals will play each team in the division in the three weeks following the Panthers game and a solid four games could give the Cardinals an insurmountable lead.

Momentum is a Powerful Thing: After a disapointing road trip to the great north east, the Cardinals rebounded with two impressive wins over quality opponents. They're riding a wave right now after what some have called the greatest Cardinals regular season win in recent memory. I would argue though that this game is just as important to the mental makeup of the team. At some point these guys will have to break through with a big road win and with the momentum that's building right now, this could be the week.

Respect: Most of the time perception changes slower than reality and for that reason, most NFL fans still view the Cardinals as the doormats of the NFL. Most still mark a W on the schedule when they see Arizona in the upcoming week. Reality says that this team was 8-8 last year with several quality wins but this is a 'what have you done for me lately' league. We've heard players talk since training camp about earning respect and establishing a new tradition.

While a loss to the Panthers certainly wouldn't doom the 2008 season, a win could very well define it. Thoughts? Can it be done?