Ken Whisenhunt addressed the media today and there were some interesting answers considering the way yesterday's game went between the Arizona Cardinals and Carolina Panthers. You can hear the press conference in total (right here) or read Darren Urban's recap as well. Check out the recap, after the jump....

Injuries: Travis LaBoy was sore after the game and they'll have to seen how he 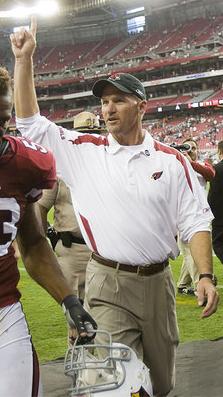 shows up today. Aaron Francisco was also dinged up but he isn't seriously injured.

On the running game or lack there of: The Panthers' for whatever reason were loaded up to stop the run and often chose to single cover the wide outs. There were 8-10 plays that were changed from run to pass at the line of scrimmage. He did acknowledge that at some point later in the year, when weather becomes a factor, they'll need to be able to run the ball better.

Offensive Line and Passing Game: He was impressed by the play of the offensive line, especially in pass protection. The Panthers blitzed quite a bit and the offensive line did a good job of protecting Kurt and limiting Juluis Peppers.

Tim Hightower vs. Edgerrin James: Interestingly enough, Whiz wouldn't rule out Hightower taking over the starting role or getting the majority of carries at some point this season but he did say it was a 'process.' Hightower's handled everything well so far but they don't want to give him too much too quickly.

On Anquan Boldin: He played great obviously and played more than they expected. Early Doucet was active because they weren't sure how much Q would be able to go. The couple of times that they took Boldin out to check on him, he wasn't very happy about it.

Poor Tackling: He did spend quite a bit of time during the presser talking about how the tackling has got to be better. He said they'd spend more time this week working on it and went into detail how they'd try to improve. It did sound like he went out of his way to mention that Rolle missed the tackle on Smith's long TD (not that we didn't already know that, but sometimes coaches won't call a player by name).

On the Steve Smith Long TD: They couldn't see any definitive angle on the coaches tape but it looked clear to them standing on the sidelines. It came down to the officials not being able to see enough evidence to overturn it.

On the Fake Field Goal: He understands the criticism and it's deserved. He acknowledges that it was a bit too long to convert but that he thought if they could convert and put seven on the board that it was worth the risk. He also took into account that they would get the ball coming out of the half. It sounded like he thought that getting a TD there and getting ball to start would allow them the chance to deliver a knockout blow.