With the Arizona Cardinals sporting more injured tight ends that healthy ones, they had little choice but to sigh Stephen Spach today. Apparently Cardinals GM, Rod Graves read Hawks' fanpost and voted for the third option because they cut Oliver Celestin to make room for Spach. He most recently spent time with the Patriots but he hasn't played in a game since 2005. He signed with the Eagles after being undrafted out of Fresno State and actually played in 13 games as a rookie (7 receptions for 42 yds). Spach was cut by the Eagles prior to the '06 season but didn't resurface until 2007 when he was signed by the Vikings and later the Patriots.

Spach (6'4 250) isn't a receiving threat at all considering that he had 19 receptions combined his junior and senior years at Fresno State. He's painfully slow (4.9 range) but he's smart player (All-academic) and looks like poor man's Jerame Tuman. We'll see how long he sticks around when (or should I say if) Ben Patrick and Leonard Pope get healthy, but until then at least we found a good picture of him stiff-arming a Cowboy: 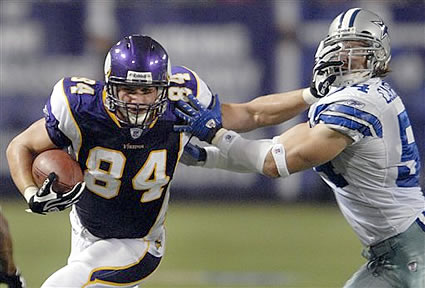