Can the Arizona Cardinals Defense Slow Down the Rams Offense?

Share All sharing options for: Can the Arizona Cardinals Defense Slow Down the Rams Offense?

The Arizona Cardinals defense has been a bit of an enigma this season. At times they look like one of the better, most athletic units in the league, but at other times they look like a team that would struggle against a middle of the road college football team. Inconsistent is the best way to describe a unit that's allowed 10 points combined in the first half of the past two games and 41 points combined in the second half of the same games. The one thing they have done consistently is give up big plays. The defense ranks in the bottom 10 in both running and passing plays allowed over 40 yards and they've allowed at least one 40 yard touchdown in four consecutive games (and 5 of 7 this season). Just for the record, the Rams have had a play of at least 40 yards in six consecutive games (seven total). So how can the Cardinals keep the Rams from breaking big plays?

Sound Tackling: Ken Whisenhunt said that poor tackling (combined with turnovers) were the primary reasons that the Cardinals lost on Sunday. Missed tackles led to long touchdowns for Steve Smith and DeAngelo Williams and it cost the Cardinals one last chance at a comeback late in the fourth quarter. Whisenhunt mentioned 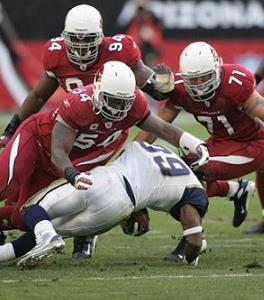 that much of this weeks practice would be devoted to reinforcing the proper technique when passing. With quick playmakers like Donnie Avery and power runners like Steven Jackson the Cardinals have to make sure that they hit and wrap up this week. There's also no reason to let up on a play until the whistle blows. Very few players break out of gang tackles against relentless defenders.

Stay Deep: Memo to Antrel Rolle: "STAY DEEP! We don't need you in run support or to make a tackle on a 7 yard slant route. We need you to break up a pass 50 yards down field. There's no reason to bite on play fakes or double moves. Your job is to play deep, deep center field and react when the ball is in the air. You've got the closing speed to track down a pass once a QB releases the ball. Trust your physical abilities and stop thinking. Master the art of breaking up the deep pass and then we can talk about becoming a complete safety." Ok, maybe it's not that simple but there has to be a way to ensure that the Rams don't throw 60 yard bombs all game long. Antrel Rolle was moved to free safety because most thought it better suited his skill set but so far his play on the field hasn't reflected that assumption. Rolle needs to get up to speed at free safety fairly quickly because the big plays are crippling an otherwise strong unit.

Agree/Disagree? Is shutting down the big play the worst problem with this defense? How confident are you with Rolle at free safety or is the problem not that simple?