Share All sharing options for: Arizona Cardinals' Kurt Warner Looks To Light Up His Former Team

Not many teams have been able to slow down Kurt Warner and the passing attack of the Arizona Cardinals this season. Warner is putting up MVP-type numbers with six multiple TD games, three games of over 350 yards passing and only two games with multiple turnovers. Not only does Warner have three receivers on pace for over 1,000 yards, he's on pace for his best season since 2001 when he called St. Louis his home. 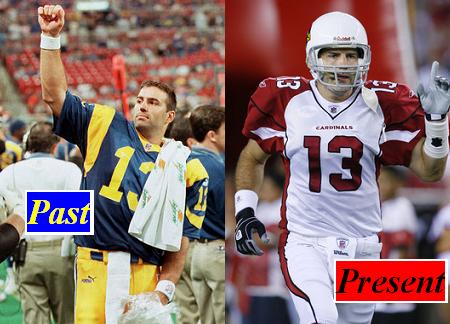 The Rams secondary is ranked a woeful 26th in passing yardage but they, much like the rest of the team, have played better since a rough start. The first two weeks of the season the Rams gave up a combined 674 yards and six touchdowns (zero interceptions) to the Giants and Eagles. To their credit though they've rebounded and have allowed just 216 yards allowed per game since while allowing four TDs and picking off six passes over the past five games. The Rams secondary has plenty of experience with an average starting age of 29 years old. The veteran of the group is former Cardinal, Corey Chavous who was never a great player but he's steady and can come up in the box and support the run. If the Cardinals can get him matched up on a receiver though, they'll have a big advantage. At the corners Tye Hill (26, 3rd season) and Fakhir Brown (31, 9th season) are both decent players but they'll be at a significant height disadvantage considering that both are under 6'0. Free safety Oshiomogho Atogwe (27, 4th season) is having the best year of the group with four of the team's six interceptions, including three in the past two games. He's also returned a fumble for a touchdown. He can play the deep middle and Warner will have to know where Atogwe is before he goes down field.

When you look at the Rams secondary and consider the fact that Fitzgerald  and Boldin have had plenty of success against this familiar foe, it's hard to imagine them not having good games. Fitzgerald has been fabulous against the Rams with a TD in four straight games (8 total in 8 games) and he's averaged 87 yards per game (including three 100 yard games). Boldin's been equally impressive with 87 yards per game, with four 100 yard games, and four touchdowns in eight games. The Rams will have to have to play out of their minds to slow down Warner and company down. Agree/Disagree? What can the Rams do to slow Warner down and give him problems?