Arizona Cardinals Roll Over The Bills: 41-17

Share All sharing options for: Arizona Cardinals Roll Over The Bills: 41-17

The Arizona Cardinals came home looking for a win as well as some momentum and they got both on Sunday by routing the Bills 41-17. The Cardinals were physically dominant from the outset of the game when they knocked Trent Edwards out of the game on their third offensive play (we'll see if Adrian Wilson is fined for the hit later in the week). One look at the box score will tell the story of this game considering the Cardinals ended up with almost a hundred more total yards, more than a 10 minute edge in time of possession and +4 in the turnover ratio. There were far more positives that anything else yesterday so we'll take the easy way out and just talk about what went right. Later in the day we'll talk about the negatives from yesterday and concerns heading into next week including Roderick Hood and Ben Patrick's injury status.

Kurt Warner: I've said it before, but it's worth reiterating: When Kurt Warner doesn't turn the ball over, he's as good as any quarterback in this league. The Bills were 6th in the league heading into this week allowing just 168.5 yards per game but that didn't stop Warner from completing over 78 percent of his passes on his way to 250 yards. He didn't end up with a great yards per attempt (6.0) but a week after having six turnovers, he protected the ball and had a very good game despite missing one of his top receivers, Anquan Boldin.

Offensive Line: One week after getting embarrassed by the Jets, the offensive line had a great rebound performance against the Bills. The O-line kept Warner clean all 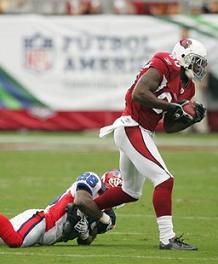 game long, not allowing a single sack and he was hit just a few times. Considering that Warner dropped back to pass over 40 times, that's quite an accomplishment. They did a really good job limiting Marcus Stroud and Levi Brown had a nice bounce back game after being abused against the Jets. The run blocking still has a long way to go but they did end up with 123 yards rushing on 34 attempts (3.6 avg).

Wide Receivers: There were several questions heading into Sunday concerning the wide receivers, such as could Breaston handle being a starter and how will Early Doucet handle his first professional game? In case you missed the game, both answers were a resounding YES. The Bills were focused on Larry Fitzgerald (7 for 52) and the result was Breaston and Doucet combining for 119 yards on 13 receptions, including a couple big third down conversions. Fitzgerald ended up with both touchdown receptions but Breaston and Doucet did a good job of moving the chains.

Defensive Pressure: After a couple of lackluster pass rush performances on the road, the Cardinals turned up the dial yesterday and harassed the Bills quarterbacks early and often. A blitzing Adrian Wilson knocked Trent Edwards out of the game on the Bills' third offensive play and they didn't slow down until the game was well out of hand. The defense finished with five sacks, two of which came from free agent signee, Travis LaBoy. LaBoy not only only led the team in sacks, he was also tied for the team lead in tackles and was a disruptive force all over the field. Another Arizona-newcomer, Clark Haggans finished with 1.5 sacks and oddly enough his sacks came on back to back plays in the fourth quarter. Gabe Watson made his presence felt in his first game back with a sack and fumble recovery.

Turnover Ratio: The Cardinals were -8 in the turnover battle the past two weeks against the Redskins and Jets and much of the talk was centered around the defense not being aggressive. Well that certainly wasn't the case yesterday as the

Cardinals were ultra-aggressive causing four turnovers which led to 17 points. The first fumble was the result of a great play by Antonio Smith when he shot the gap and blew up a handoff between JP Losman and Marshawn Lynch. That was the second play after Trent Edwards was knocked out of the game and the Bills would never recover. The Cardinals would take over at the Bills 38 and score six plays later.

Neil Rackers: I've jumped on Rackers for every mistake he's made this year so it's only fair to acknowledge him when he has a really good game. He not only connected on two field goals (47 yards and 38 yards), he also hit another one from 28 that was nullified by a Bills penalty. His kickoffs were effective even though he didn't register a touchback considering that the Bills average starting position on kickoffs was thier own 25 yard line. Rackers also helped his own cause registering two tackles, both of which came around the Bills 20 yard line.

There were other positivies about this game, but that should get the ball rolling. Later today and into tommorrow we'll chart the running and passing plays as well as continue to break down a big Cardinals win. Thoughts? Who else stood out as having a good game?