Share All sharing options for: Handing Out Grades After The Arizona Cardinals Get A Big Win Over the Bills

The Arizona Cardinals came back home and moved north of .500 with a big win over the previously undefeated Buffalo Bills on Sunday. The offense and defense both looked impressive as they jumped on the Bills early and didn't throttle back until the game was well out of hand. The Cardinals passed a big test and remained perfect at home in 2008.

Kurt Warner: Warner worked the short passing game to perfection in front of the home crowd and even though he didn't have a completion over 20 yards, he was amazingly efficient. He completed passes at a 78.6% clip and notched his second game of the season with a QB rating over 100. It was also his third game of the season in which he didn't turn the ball over (all three games resulted in Cardinals'  wins). He survived a rough hit in the second quarter that left his chin bloodied and even scampered for 11 yards on a drive right before halftime to avoid the rush and pick up a first down. He also completed at least one pass to nine different receivers and overall, 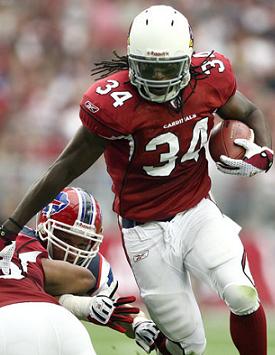 it's hard to ask too much more of your quarterback. Grade: A+

Running Backs: For the first time this season the Cardinals had three running backs active and they each got some work in, combining for 113 rushing yards and 54 receiving yards. Edgerrin James was the workhorse with 21 carries but all of his work only amounted to 57 yards (2.7 ypc), although he did add another touchdown. Tim Hightower continues to impress as a rookie with 37 yards on seven carries (5.3 ypc) and he added two touchdowns, giving him five through his first five games. His best run came on nice 17 yard burst through left side of the offensive line on a 3rd and one. I'll continue to say that he may lack some top end speed but he's got the quickness to hit a hole that Edge lacks at times. JJ Arrington got his first action of the season and for the most part played pretty well. He wasn't spectacular but he did have a good series in the third quarter where he converted a 3rd and 13 with a 13 yard reception and a 3rd and nine with a 14 yard draw play. I'm not really a JJ fan but I'm not sure that Hightower or Edge could have made those two plays. As for the fullbacks, Tim Castille was inactive but Terrelle Smith had several critical blocks, especailly around the goal line. Overall, the running game took quantity over quality with 123 yards on 34 carries (3.6 ypc) but we'll take what we can get. Grade: B-

Wide Receivers: We were wondering who would pick up Anquan Boldin's slack, but I don't think anyone expected the answer to be everyone. Nine different players caught passes and eight of them caught multiple passes. It was pretty clear that the Bills wanted to limit the big play and control Fitzgerald so Warner took exacty what he was given. He spread the ball all over the field and Breaston and Fitz ended up 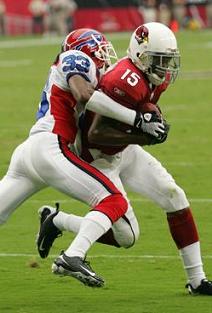 tieing for the team lead with seven receptions. Early Doucet, making his first appearance of the season, had six catches for 42 yards. Ben Patrick and Leonard Pope only combined for 15 yards on 3 receptions but they were better contributors in the running game. The receivers didn't break any big gainers but they were reliable and consistent throughout the entire game. Grade: A-

Offensive Line: The offensive line was fabulous in the passing game but they were just about average in the running game. The line didn't allow a sack for the first time this season and they didn't even allow very many hits on Warner. In the running game though they weren't as good, considering that the offense averaged just 3.6 yards per carry but the average was dragged down by the fourth quarter numbers when they ran 13 times for just 29 yards (2.2 ypc) You'd like the offense to be able to grind out yards to end a game but this offensive line isn't much of a mauling group. For the record though, they did average 4.5 yards per carry for the first three quarters and the Bills knew the Cardinals would be running in the fourth to milk the clock. Grade: B

Thoughts? Agree/Disagree on the grades? How much confidence do you have in the running game?