Breaking Down the Arizona Cardinals Running Game Through Five Weeks

Share All sharing options for: Breaking Down the Arizona Cardinals Running Game Through Five Weeks

After a feeble attempt to break down the Arizona Cardinals running game a couple of weeks ago, it became pretty apparent that one week's worth of stats wouldn't tell much of a story. That naturally led to looking at the cummulative season stats on both Edgerrin James and Tim Hightower. The running game as a whole has has been a mixed bag of results so far, when compared to years past. The good news is that they've been surprisingly effective around the goal line with eight touchdowns on the ground through five games, which is only one short of last year's total. The not-so-good news is that even though they're averaging more yards per game (94.2 yards per game in '08 to 90.0 ypg in '07), they're averaging less yards per carry (3.3 ypc in '08 to 3.6 in '07). Granted the lower yards per carry could be some what contributal to more goal line carries or the number could also be hampered by seven quarterback kneel downs through five games. With all that being said, here's how Edge and Hightower have fared through five games. 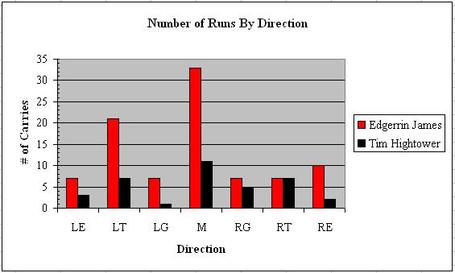 The number of carries up the middle shouldn't be too surprising considering that both running backs are 'speed-challenged.' I was somewhat surprised by James' high number of carries behind left tackle but after looking back at the numbers, nine of those carries came in the Buffalo game. That was the only game in which he ran behind LT more often than any other direction. It's hard to tell much about Hightower's carries because he's only got 36 on the season but nearly a third of them been straight up the middle. 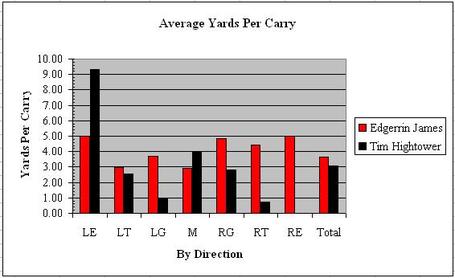 A couple of things jumped out at me after compiling all the stats. First, I was surprised at how well Edge ran the ball to the outside and the entire right side. Some of the success to the outside could be because it surprises a defense or maybe the blocking is just better on the edges. It's also pretty clear that perhaps Edge isn't the right guy to be carrying the ball straight up the middle. As for Hightower, his average is skewed because of his 17 yard touchdown around the left end against the Bills. The only direction that he's got any significant carries is up the middle, where he's been pretty effective.

It's might be still to early in the season to make an definitive statements about who should run the ball and where but we'll keep an eye on how the stats play out as the season progresses. During the bye week we can also look at how each back runs on different downs, different quarters and other situations. So if there are any situational stats you'd like to see, let me know and I'll see if I can get it done. What about these stats though? Is Edge still the clear-cut #1 back? Has Hightower shown the potential to be the #1 in the future?