Arizona Cardinals Over Bills 41-17: Who Gets the Game Ball?

Share All sharing options for: Arizona Cardinals Over Bills 41-17: Who Gets the Game Ball? 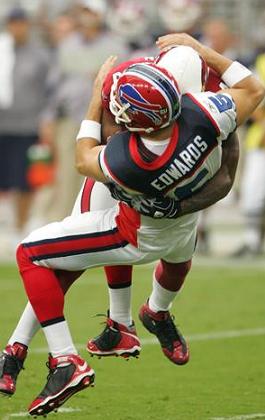 player had a record setting game, there are several guys who played a big role in the 41-17 win. Here's the guys who should be in the conversation:

Kurt Warner: How do you bounce back from a six turnover game? Well completing 78.6% of your passes for 250 yards, two touchdowns and ZERO turnovers is an awful good start. Warner was not only efficient, he was also unstoppable. Despite missing one of his top receivers, Warner shredded the Bills defense and was a huge part of the win.

Larry Fitzgerald: There was some concern that the Bills would blanket Fitzgerald with Boldin not playing and force Warner to find another reciever. Fitz proved that it wasn't that easy though. They didn't allow him to get downfield but he still tied for the team lead with seven receptions and he hauled in both Kurt Warner touchdowns.

Travis LaBoy: What else can you say? Led the team in tackles and chipped in with two sacks. LaBoy kept JP Losman's head on a swivel all game long and he's been surprising effective against the run. He's taken to the OLB position much quicker than we could have expected.

Adrian Wilson: The leader of the defense was only on the field for a dozen or so plays because of a bad hammy, but that didn't stop him from making the play of the game. He flattened Trent Edwards with a lethal, yet legal, hit and changed the game before it even started. Regardless of the fact that he didn't register a tackle, he deserves a mention because he made the play of the game.