Cowboys at Arizona Cardinals: Who's Got the Edge?

Share All sharing options for: Cowboys at Arizona Cardinals: Who's Got the Edge?

The Arizona Cardinals welcome the Dallas Cowboys to the desert this week and even though they're favored on the road, they've got their share of questions marks. They're secondary is dinged up, the offense isn't clicking and they've got more off the field questions every day. The Cardinals should be able to create some mismatches on Sunday and it'll be interesting to see how aggressive the game plan is on both offense and defense. First we'll take a look at what the Cardinals' defense will have to do in order to limit the Cowboys' offense. The Dallas offense is second in the league in scoring (30.2 ppg) and third in the league in total yards (407.4 ypg). Check out the breakdowns after the jump.....

When the Cowboys Pass: Tony Romo is on the verge of being an elite quarterback and the only area that is holding him back right now is his propensity to turn the ball 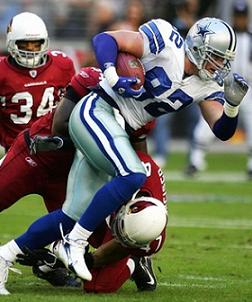 over. He's thrown a pick in eight straight games and he's had 13 fumbles (four lost) over the past 21 games. The Cardinals pass rush will have to put pressure on Romo and force him to make mistakes. Romo's favorite target is Jason Witten and he's arguably the best tight end in the league. He's off to a monster start (on pace for 112 receptions and 1,411 yards) and he's capable of being a dumpoff receiver or stretching the field down the seam. Adrian Wilson will probably be responsible for limiting Witten because a linebacker simply can't run with him. At receiver, Terrell Owens (on pace for 16 TDs) is still a play maker every time he touches the ball but if the Cardinals can frustrate him early they might be able to knock him out of his game. Recently teams have been jamming him at the line and it resulted in him getting off to a slow start. Patrick Crayton is a decent #2 receiver but he's nothing special. Eric Green may be able to handle Crayton by himself and might be able to hold his own on an island. If he can do that, it'll open up the rest of the secondary to key on Owens and Witten.  One name to remember is Miles Austin (24.6 ypc, 2 TDs) though because he's become a guy that they'll try to get deep at least once a game. He's got great speed and they'll air it out to him at least once. If I was game planning for the Cowboys offense, I'd put Green on Crayton and A-dub on Witten mano-a-mano. That would leave Hood (hopefully he can play) to jam TO at the line and Rolle to stay deep. It'll be crucial for Rolle to stay deep this week because TO and Austin can get deep at any time.

When the Cowboys Run: 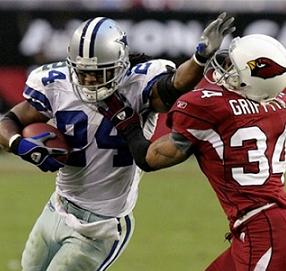 The running back combo is lethal with Marion Barber III running tough and Felix Jones flying around the field. Barber (4.2 ypc, 4 TDs) wears down the defense with his bruising style and Felix Jones knocks them out with his speed (9.0 ypc, 3 TDs). MBIII is a contact runner who dishes out punishment rather than taking it and the Cardinals will have to make sure that they're flying to the ball because he is rarely tackled by a single player. While Barber is a concern, Jones may just be the bigger threat. He's got true game changing speed and he's got at least one 20 yard run in three out of four games that he's had a carry so far. In order for the Cardinals to keep the Cowboys from pounding the ball down their throat they have to tackle well. If you miss a tackle on Felix Jones, it's six points. Also, the Cowboys have handed the ball to Owens three times in the past two games, so don't be surprised if he runs a reverse or lines up in the backfield at some point, especially considering the Cardinals inability to stop the reverse lately.

Overall, the key to defensive success will be for the front seven to apply pressure and for the secondary to limit the big play. The defense as a whole will have to tackle well. If they can do that, the Cowboy offense, which relies on big plays, will get frustrated and make mistakes. I'll be back with the Cardinals offense vs. Cowboys defense later today, but for now how you do you see the Cardinal defense matching up? Who's the biggest threat in your mind?