Cowboys at Arizona Cardinals: Who's Got the Edge? (Part II)

Share All sharing options for: Cowboys at Arizona Cardinals: Who's Got the Edge? (Part II)

The Arizona Cardinals has been one of the league's best units in 2008 and they're a big reason why this team is above .500 and aspiring for an NFC West crown. Overall the offense is ranked 5th in both yards per game (376.8) and points per game (29.4). The Cowboys defense was supposed to be dominant this year with them entering their second season under defensive-guru, Wade Phillips. A combination of injuries and ineffectiveness though has led to the defense being ranked just 14th in yards per game (305.2) and 16th in points per game (22.2).

When the Cardinals Pass: We all know that the Cardinals passing game is nearly impossible to shut down when they're on top of their game and that Kurt Warner (on pace for 4,710 yards and 32 TDs) is the leader of the attack. The Cowboys will try to bring pressure though to rattle him and start the turnover machine. How they apply 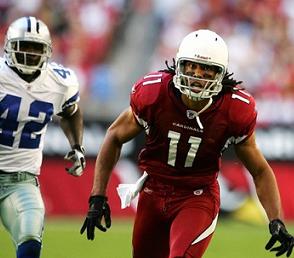 that pressure could be the difference in the game though. If they can pressure Warner with three or four guys, it could be long day for the Cardinal offense, but if they have to blitz five or more, Warner can make them pay. Outside backers, DeMarcus Ware (5 sacks) and Greg Ellis (2 sacks) could end up tilting this matchup in Dallas' favor. (In order to talk about the match-up between the Cardinal receivers and the Dallas secondary, I'm going to assume that Anquan Boldin isn't going to play and that Adam 'don't call me PacMan' Jones is going to play.) The Cardinals receivers should be able to give the Cowboys secondary some problems considering that Terence Newman has already been ruled out for the game. Anthony Henry will have to try and match up with Larry Fitzgerald and while Henry's been a decent corner for quite some time, the 31 year old isn't in the same zip code as Fitz. The match-up between PacMan and Steve Breaston should be an interesting one considering that both of their games are based on speed. Jones isn't quite up to 'football speed' yet after his year-long suspension and he's looked vulnerable at times. If they're locked up all game long, look for Breaston to try a double move to try in order to take advantage of Jones' aggressiveness. The Cowboys' third and fourth corners are both rookies, Mike Jenkins (1st round) and Orlando Scandrick (5th round). The Cardinals don't use the tight ends much in the passing game but when they do, Zach Thomas should be up to the challenge of covering them.

When the Cardinals Run: The Cardinals running game has been stuck in neutral for most of the season but it hasn't been from a lack of trying. They're 14th in the league in rushing attempts per game (28.4) but they don't have much to show for their efforts. Edgerrin James is averaging just 3.6 yards per carry and his lack of explosiveness doesn't strike much fear in opposing defenses. With the Cowboys having a tough run defense, Tim Hightower could get some extended playing time since his tough running style should be better suited to grinding out yards. The key to the Dallas defensive front seven so far has been nose tackle Jay Ratliff and he'll give Lyle Sendlein all he can handle. If the Cardinals want to establish a ground game, they'll likely have to attack the edges of the Cowboys' defense where Ware and Ellis are superb pass rushers but can be exposed when the run is directed straight at them. The offensive line will also have to find a way to get to the second level and pick up Zach Thomas if they want to pick up more than a couple of yards per carry. Thomas is having a good season to this point and hasn't shown any signs of slowing down, despite his age (35).

I may be over simplifying this game but I think it could ultimately come down to how much time Kurt Warner has in the pocket. If the offensive line is able to give him adequate time to deliver the ball, he should be able to shred the Cowboys' injury riddled secondary. I don't expect the Cardinals to be any more successful running the ball than they have been at any point this season. Thoughts? Agree/Disagree? Can they keep Warner upright?