Share All sharing options for: Arizona Cardinals Beat the 49ers 29-24 on Monday Night Football but an Ugly Win Still Looks Pretty in the Standings

This was supposed to be a coming out party for the Arizona Cardinals on the biggest stage of the regular season, Monday Night Football. They were supposed to come out at home and rout their division rival, the San Francisco 49ers. We all know the game didn't go exactly the way that the Cardinals were hoping but by the end of a long grueling 60 minutes of football, they did emerge victorious and in the end that's all that really matters. There are numerous talking points from last nights game including questionable officiating, missed opportunities by both teams and the continued great play by this Cardinals' passing game. We'll cover the officiating later in the week, but here's what stood out to me last night (after the jump):

Kurt Warner in the MVP (as Hawk previously stated): And quite frankly, he's the MVP by a considerable margin. If there's any question in your mind, just ask yourself what would the outcome of that game been without him completing over 76% of his passes for 328 yards and three touchdowns. The running game was virtually non-existent (46 yards total) but that didn't stop KW from strapping this entire team on his back and leading the Red Birds to victory. From the start of the second quarter to the middle of the fourth, Warner led to offense on scoring drives in five out of seven drives (not counting the one play drive that ended the first half). Say what you want about him having great weapons, which he does, the fact is that he puts the ball exactly where it needs to be and throws that very few quarterbacks can make in this league.

You Can't Just Take Away Fitzgerald and Boldin: The Niners defense came out 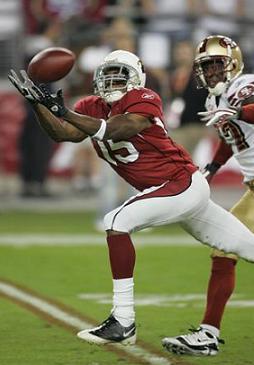 with the game plan of taking away Fitzgerald and Boldin and when you look at first half stats, their plan kind of worked. I say 'kind of' because Fitz and Q had 44 yards and the half on four receptions, but Warner also threw four incompletions their way. The portion of the Niners game plan that didn't work though was how to handle Steve Breaston. He caught every pass throw his way (seven receptions) and had over 100 yards by halftime. The Niners' focus changed in the second half and KW was able to distribute the ball more evenly and Fitz, Q and Breaston all finished with at least seven receptions. With the emergence of Steve Breaston, defenses can not simply game plan around Fitz and Q anymore and that's good for the entire passing game.

Struggles in the Red Zone: The Cardinals weren't terrible in the red zone but they weren't great either. On one hand, they did convert every trip into points (6 trips, 3 TDs and3 FGs), but a 50% conversion rate is not what you expect from this high powered offense. The most disheartening red zone trip (at least in my mind) was took place at the start of the fourth quarter, with the Cardinals down 24-20. The Cardinals' defense forced a fumble from Shaun Hill and set up the offense at the Niners' 10 yard line. I fully expected the offense to put seven on the board, take the lead and never look back, but it didn't happen. Following a three yard Hightower run, the Niners jumped offsides and the Cardinals are set up with 2nd and three from the three yard line. Next would come one of the ten Cardinals penalties though, a Levi Brown false start (although it was possibly caused by Lutui), and after a short pass and an incompletion the Cardinals would settle for a field goal. The Niners would retain the lead for another 10 minutes.

The Defense Did What it had to do in Crunch Time: Shaun Hill proved to be a much better quarterback than yours truly gave him credit for and the offensive line did a good job of not letting the Cardinals defenders get to him. Hill foiled the Cardinals defense for three quarters and even though he didn't have great stats, he didn't turn the ball over and looked to be on track for his third career with in as many starts. The final 16 minutes of the game though the Cardinals defense, who had looked just one step behind for most of the game, forced three turnovers. The first two turnovers set the Cardinals' offense up at the Niners 10 yard line and 5 yard line, respectively. The third turnover ended a Niner drive that could have allowed them to take the lead with about two minutes left. And all of that isn't even mentioning an outstanding goal line stand to win the game as time expired, oh wait I just did. The defense wasn't great but great but the offense wouldn't have put 29 points on the board without their help. 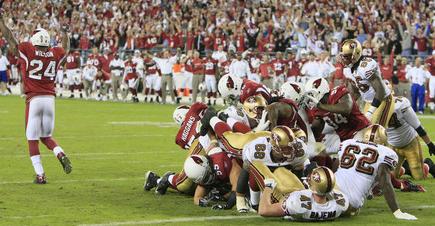 All in all, this game wasn't pretty for either team. I'm sure plenty of Niners fan feel like they lost a game that they should have, and maybe even deserved to win. There's one adage that I've always believed in though when it comes to analyzing a game: The better team will make the plays to win a game and the bad team will make plays to lose a game. Last night the Cardinals were the better team and they made the plays that snatched a victory from the jaws of defeat.