Is Anquan Boldin About to Become a Big Part of the Arizona Cardinals Running Game?

Share All sharing options for: Is Anquan Boldin About to Become a Big Part of the Arizona Cardinals Running Game?

It's no secret that the Arizona Cardinals running game has been pretty pedestrian through nine games this season. As a team the Cardinals rank 29th in rushing yards per game (88.1) and tied for 30th in yards per rush (3.5). The struggles led to a change at running back two weeks ago and an unveiling of the ultra-popular 'wild cat' formation this week. Leading the 'wild cat' was Anquan Boldin who ended up carrying the ball three times for 19 yards, including the longest rush of the game (14 yards). He's now carried the ball 6 times for 57 yards during his 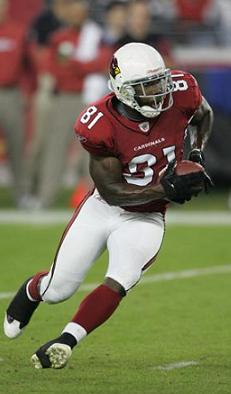 seven games this season and following the Niners' game Ken Whisenhunt hinted that they were just 'scratching the surface' of what Boldin can do in this offense.The next logical question though should be, is it really a good idea to expose Boldin to that kind of punishment?

It's common knowledge that running backs take more of a physical beating than receivers, especially when you run between the tackles. Even for a tough, physical receiver like Boldin getting regular carries could take it's toll. There's a big difference between getting tackled by a safety or corner than being tackled by a defensive lineman or linebacker. Boldin's always been a tough player but he's also had a problem staying healthy for an entire season. He's only played a full 16 games twice in his six year career and we all know about his most recent injury. I guess ultimately the debate would come down to, is the risk of injury worth the advantage that he'd provide?

The Cons - Risk of Injury: Anyone who watched the Monday Night game got bludgeoned to death with "Anquan Boldin's fractured face" talk from Kornheiser and the rest of the booth, but (as much as I hate to admit it) they do have a point. Boldin's still recovering from a serious injury and exposing him to potential violent hits from massive defensive linemen is simply unnecessary. His contributions in the passing game outweigh the possible benefits he'd provide by running. Lining up in the 'wild cat' formation has it's advantages because it's something new that defenses haven't fully caught up to yet, but there are other players on this roster that can run the system. There are three running backs on the roster who can play the QB role or if they want someone with experience throwing the ball, Early Doucet is a former signal caller.

The Pros - The Best Option: Ken Whisenhunt often says that he'll "play whoever gives us the best chance at winning." If they're looking for a player to run the 'wild cat' system, the best player is Anquan Boldin. He's the most versatile player on the roster, who gives them a legitimate run or pass option, and he's a veteran that Whiz can trust to make good decisions. Boldin's also the best run after catch receiver on the team and faster than any running back not named J.J. Arrington. In the end, Boldin is the only guy on the roster who's got the necessary mix experience, speed and toughness to really make the system effective.

Overall, I think the answer is pretty clear. If they're going to run the 'wild cat' formation a handful of times a game, the best player to line up at quarterback is Anquan Boldin. This is the NFL and you can't let a fear of injury stop you from putting the best options on the field. Boldin's got a history of injuries but he's also got a history of being a great player and great players deserve every opportunity to help their team win. Agree/Disagree? Is Boldin the best option and is it worth the risk? Should they run the 'wild cat' more often or scrap it all together?