Arizona Cardinals Beat the Rams 34-13: Sometimes It's Better To Be Lucky

Share All sharing options for: Arizona Cardinals Beat the Rams 34-13: Sometimes It's Better To Be Lucky

Make no mistake about it, the Arizona Cardinals were good yesterday but they also had their share of luck in a 34-13 win over the St. Louis Rams. On a day where would-be Rams' interceptions turned into long TDs for the Cardinals and shotgun snaps over Warner's head turned into first down passes, it seemed at times that the Cardinals could do no wrong. They finished the game with over 38 minutes in time of possession and a +3 in the turnover battle. The Cardinals now have a commanding three game lead in the NFC West and the next time they take the field it'll be in front of a national audience on Monday Night Football. For now though we relish in a great divisional win. 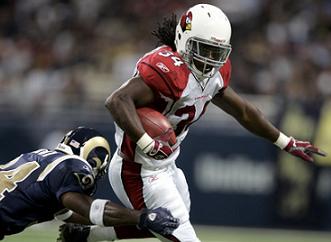 Tim Hightower and the Running Game: The headline of his game is that Hightower not only got the first start of his career, he also finished with his first 100 yard game. He finished the game with 109 yards on 22 carries (4.95 ypc) and a 30 yard touchdown run. His blend of power and quickness on display and quite impressive yesterday. If it wasn't surprising enough that Hightower started, it was almost shocking that Edgerrin James didn't step on the field for a single snap. J.J. Arrington was the backup running back and he finished with 119 total yards (62 rushing, 57 receiving). It was the first time Edge was healthy for a game but didn't touch the football since week 17 of the 2005 season when he was inactive as the Colts coasted into the playoffs with a win over the Cardinals. The running game finished with 177 yards on 33 carries (5.4 ypc) and was a big reason why the Cardinals held the ball for over 38 minutes.

Kurt Warner for MVP: Too strong? It shouldn't be. Kurt Warner continued to play great football on Sunday finishing with 342 yards on 23 of 34 passes with two touchdowns and zero turnovers. Warner started off a little slow and was just 7 of 16 for 80 yards midway through the second quarter but he'd quickly turn that slow start into a monster game. From about the five minute mark in the second quarter (4:43 left to be exact), Warner was 16 of 18 for 262 yards and the Cardinals offense scored 17 points and only punted twice. Just for the record, he's now on pace for 4,862 yards which would rank 2nd for most yards in a single season in NFL history. 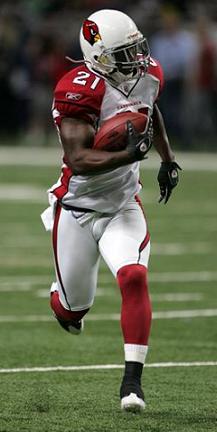 Antrel Rolle: Just three days after I called out Rolle out for not playing well and not staying deep, he steps up with his best game of the season. Not only did he pick off his first pass (on a pass 25 yards down field) and return it for TD, he also looked like a sound tackler instead of a guy just looking for a highlight knockout. Time will tell if this week was anomaly or a sign of things to come but regardless it was nice to see Rolle flash the play making abilities that we all know he possesses.

Defense: It looked like a bad start when Derek Stanley (was I the only one who said, WHO?) made a great catch and raced to the end zone for an 80 yard TD on the Rams' second offensive series. The defense proved that they were up for the fight though as they wouldn't allow a Rams drive over 32 yards the rest of the game. From the middle of the first quarter to the start of the fourth, the Rams offensive drives resulted in six punts, an interception, a fumble and one that ended on downs. Overall the Rams offense finished with just 231 yards (61 rushing and 170 passing) and three turnovers.

Overall there are some things that the Cardinals should cherish about this game, they finally looked like a team that could move the ball on the ground and a defense that could stifle an opposing offense for four quarters. It'll be very interesting how they handle the running back situation for the rest of the season but for one week, the ground game looked not only solid and productive but also downright explosive. In the end, was this a great win and sign of things to come or just a case of the Cardinals dominating an inferior opponent? Hightower and JJ the 1-2 combo of the future?