As reported by our very own AJ Birdwatcher, the Cincinnati Bengals have snatched up 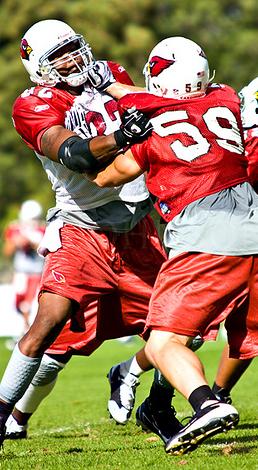 Chris Harrington from the Arizona Cardinals practice squad. Harrington, a sixth round pick from April, flew under the radar of a popular draft class, but he will be missed (by those close to ROTB anyways). He'll be forever remembered as the first Arizona Cardinals player to agree to (and actually follow through with) an interview with Revenge of the Birds. You might remember that Harrington was a college defensive end who was making the difficult transition to outside linebacker (here's an excerpt from the interview about the transition):

Q - I know that you played at linebacker some of the time at Texas A&M, but what part of your game will need to most improvement in order for you to excel as an outside linebacker in Arizona? What area of your game is best suited for standing up and rushing off the edge?

A - I played defensive end during my career at A&M, during some situations I would play a stand up defensive end /olb. I think the biggest challenge for me has been pass coverage. As a D-Lineman you are always rushing, rarely ever dropping into coverage, and when I was I was given a vague responsibility, like cover the flat. Since arriving in Arizona, I have been challenged to learn a whole new position and frame of mind. I didn't know what cover 2 was and had no idea what the secondary was doing. Now I have to know what everyone on the field is doing. It has opened up a whole new world to me and I am enjoying learning a whole new side to the game. I think I am good fit for the defense and the OLB position. I am very good at persuit and flying to the ball and I bring an aggressive mentality that I have from my D-Line days. I have lightened up a bit so I feel faster than I ever have.

Anyways, he'll be missed but ROTB wishes him the best and hopefully he'll have a long, successful career in the league. The Cardinals didn't waste any time filling out the practice squad though by signing Kelly Poppinga today. Poppinga was an undrafted rookie out of BYU that has bounced around from the Dolphins to the Rams and now our very own Arizona Cardinals. More on Poppinga after the jump....

Poppinga isn't your average rookie though considering that he's 26 years old and will turn 27 before the Super Bowl. He took a few years 'off' after high school and most of that time was filled with a two-year mission for The Church of Jesus Christ of Latter-day Saints to Guayaquil, Ecuador. Once he got back to the states he 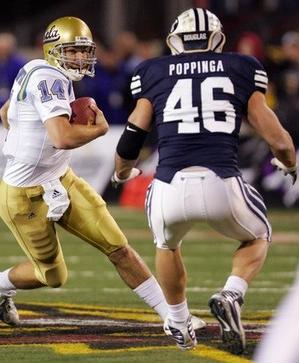 enrolled at Utah State and he played sparingly as a freshman but became a starter in his sophomore season (2004), ranking third on the team in tackles (61). He'd lose another year of football the following season though when he transferred to BYU. He'd play in every game the following year (2006) but he'd start just two. He finished ninth on the team in tackles but he did rack up two sacks and two interceptions. His senior season he moved to inside linebacker after playing on the outside his entire career, but the move paid off pretty well. He finished the season with 113 tackles, 7.5 stops behind the line, five pass defenses and an interception and helped lead the Cougars to a top 15 ranking and an 11-2 record. He'd also earn 2nd team all conference honors.

As for a scouting report, it looks like he's a very smart player that lacks some of the necessary physical tools to excel on Sundays. He's got adequate strength and speed but he's not going to 'wow' you with athletic ability, but he's smart enough to konw his limitations and still make plays. He was drafted as an outside linebacker because most scouts feel that he doesn't have the strength to play inside and take on bigger lineman, but some also think that his eventual home will be as an inside backer in a 3-4. I'd imagine his versatility had something to do with the Cardinals interest. He does have some nice blood lines though considering that both of his brothers either have played or are playing in the NFL, in fact one of them (Brady) is a starting linebacker for the Packers.

If you're reading this and wondering why in the world I'm talking so much about a practice squad addition, it's because Clark Haggans injury could affect the roster. Kent Somers mentioned earlier this week that Haggans could end up on IR with his injured foot. Somers did say that his spot would probably be filled with Elliot Vallejo but that would leave the Cardinals short at linebacker and on special teams. Anyways, maybe this is much adu about nothing but we'll see. So what do you think about this kid, err 26 year old rookie? Anyone seen him play?