Can the Arizona Cardinals Offensive Line Handle Jared Allen and the Williams Wall?

Share All sharing options for: Can the Arizona Cardinals Offensive Line Handle Jared Allen and the Williams Wall?

(I''m writing this under the assumption that Pat and Kevin Williams will play this Sunday. That situation is still up in the air but ROTB, like the Cardinals, will have to prepare for them. If they do not end up playing, consider it a bonus)

The Arizona Cardinals have faced some premier pass rushers this season including Joey Porter, DeMarcus Ware, Julius Peppers and Justin Tuck (55.5 sacks combined), but the best pass rushing defensive end might be coming to two this weekend. The Minnesota Vikings gave up a first round and two third round picks to trade for Jared Allen this off season and he's rewarded them with 45 tackles, 12.5 sacks, 3 forced fumbles and two safeties. Allen is scary-good and to make matters worse for the rest of the league, he's still young enough (26 years old) that his best days could be ahead of him. To make things even worse for the opposition, Allen isn't the only great player on the Vikings' defensive line. Together Allen and the 'Williams Wall' have combined for six Pro Bowls and four All-Pro selections, which is pretty remarkable considering that Allen and Kevin Williams are 26 and 28 years old, respectively. Together they've formed the most dominant defensive line in football, something that not even the Titans can argue with at this point, and we haven't even mentioned the 'other' defensive end (Ray Edwards). Together they've combined for 183 tackles and 25 sacks and they're a huge reason why the Vikes give up just 73.4 yards per game on the ground (2nd in the league). So how critical are these three guys to the success of the Vikings defense and their team as a whole? Consider this:

Ok, what does that huge table tell us in a more concise summary:

So how on earth will the Cardinals offensive line be able to contain Allen and the Williams twins? Well, first we have to assume that the Cardinals won't have any success running the ball. After all, If they can't move the ball on the ground against the Rams, they're not going to be able to against the Vikes. So that leaves protecting Warner front their dominating pass rush. 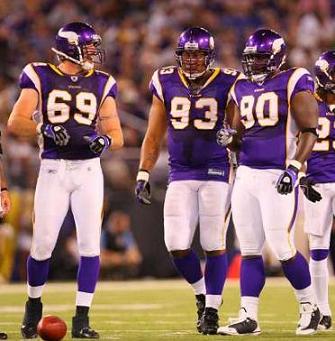 Since the interior of the offensive line will have their hands full with the Williams Wall, the job of slowing down Jared Allen will likely fall on the shoulders of Mike Gandy. Gandy's a smart, veteran player but he simply doesn't have the physical capacity to play with Allen one-on-one. To counter that mismatch the Cardinals can either line a tight end up on Gandy's side or use a back to chip Allen when he's coming around the corner. It'll likely take a combination of the two to keep Allen guessing but either way, they've got to give Gandy some help on passing downs. As for the Williams Wall, Kevin Williams is a much bigger threat on passing downs than Pat. Kevin is a wide bodied (6'5 311) guy with an explosive burst to penetrate the backfield the athleticism to create havoc once he gets there. Reggie Wells and Lyle Sendlien will probably spend most of the day doubling Kevin and they'll have to play a great game to keep him under wraps. With the rest of the line tied up, the job of slowing down the big man, Pat, will likely fall on Deuce Lutui. Pat isn't the best pass rusher but when he's on field in passing downs (he's often replaced by Brian Robinson) he collapses the pocket and can force the QB to shuffle towards Allen and Kevin. The final job will fall on Kurt Warner. He's got to know what they're facing and understand that he can't hold onto the ball for extended periods of time. He might have to sacrifice a big play down the field for a quick dump off at times.

So good/bad or indifferent, how do you think they try to handle the Vikings defensive line? Will they have adjust their game plan or can they give Warner enough time in the pocket?