You See, What Ha-Happened Was......The Arizona Cardinals Get Blown Out by the Vikes 35-14

Share All sharing options for: You See, What Ha-Happened Was......The Arizona Cardinals Get Blown Out by the Vikes 35-14

On a day when the Arizona Cardinals could pick up a win against a quality opponent and improve their playoff position, all while being in the cozy confines of University of 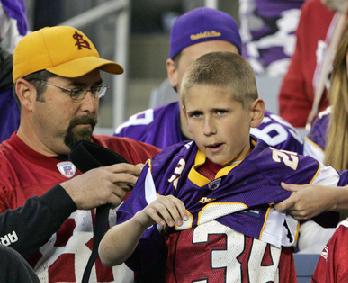 Phoenix Stadium, they simply didn't have the stomach for a fight. Listening to several different sports radio talk shows throughout the week, I kept hearing the same concern about the Cardinals: How will they handle clinching the division already? The answer, for this one game, was very poorly. They, for the most part, looked like a group of guys who were content with their accomplishments but didn't have an appetite to finish the job. The defense was pathetic allowing over 200 yards rushing and allowing Tarvaris Jackson to throw for four touchdowns. The offense wasn't much better considering that they put just seven points on the board. And we certainly shouldn't leave out the special teams considering that they allowed an 82 yard punt return for the first score of the game.

So how bad was it? At the end of the first quarter the Vikings had already scored three touchdowns and Tarvaris Jackson had already matched his career high with two touchdowns passes. At the same time, the Cardinals had one first down, two turnovers and they'd used up both challenges, losing both. By halftime the score was 28-0, Adrian Peterson already had over 100 yards rushing and Tarvaris Jackson had set a new career high with three touchdown passes. The Cardinals on the other hand, finished the first half with three 'three-and-out' drives, two turnovers and just four first downs (three of which came on one drive). 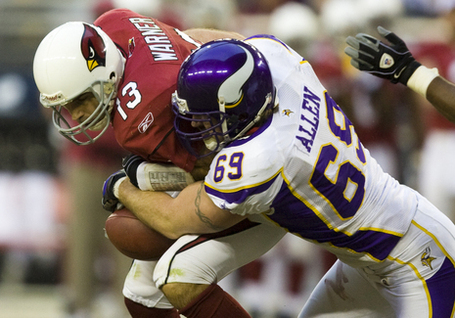 The second half was better than the first but that's not saying very much because, frankly, it couldn't have been any worse. The Cards did show some signs of life on their first drive of the second half when Jerheme Urban took a short pass, broke a couple of tackles and raced down the sidelines for a 50 yard touchdown. After both teams traded punts following the touchdown, the Vikings mounted a drive and lined up to kick a field goal that would have put them up 31-7. Dominique Rodgers-Cromartie had other ideas though as he raced around the edge and blocked the field goal. Roderick Hood, who'd had a terrible game, picked up a favorable bounced and outran everyone to the end zone. All of a sudden the Cardinals were in striking distance at 28-14 and you almost got the feeling that we were about to see something magical. But as Red said in Shawshank Redemption, "Let me tell you something my friend. Hope is a dangerous thing. Hope can drive a man insane." Any hope the Cardinals might have had was short lived as the Vikings very next drive went 80 yards in just seven plays and the proverbial 'nail in the coffin' was hammered down when Tavaris Jackson thew yet another touchdown pass.

The bottom line is pretty simple. The Arizona Cardinals were not ready to play football yesterday. They wore they're championship hats last week, hung the championship banner at the facility and slept walked into a game that could have solidified themselves as playoff contenders. They'll have another chance to do the same thing this week and if I Ken Whisenhunt today, I'd burn the games tapes, bury the ashes in the backyard and turn all focus and attention to the New England Patriots. Thoughts about the game? How much more important is this Sunday's game, if at all?