Arizona Cardinals Secondary vs. New England Patriots Receivers: Who has the Edge?

Share All sharing options for: Arizona Cardinals Secondary vs. New England Patriots Receivers: Who has the Edge?

The Arizona Cardinals defense against the pass has been in the doghouse for most of the season. They've had some decent games and their yards per game is still respectable (15th), but when you give up 31 passing touchdowns in just 14 games, you tend to stand out (and not in a good way). They've given up three or more touchdowns five times including four or more three times. They've had they're struggles, even recently, but they are showing some signs of improvement with Domininque Rodgers-Cromartie (rookie) and Antrel Rolle (new position) settling into their new roles. The entire secondary will be tested this Sunday though when Matt Cassel and company come to down. Cassel has thrown for over 400 yards twice this season and his receivers (Randy Moss and Wes Welker) are among the best in the league. So how will the Cardinals secondary fair against Cassel and his compliment of weapons?

Well before we get into that, there's been something that's been bugging me. I keep wondering how the Clancy Pendergast is going to deploy DRC and Hood. He can obviously either just let them stick to one side of the field and cover whoever lines up in front of them or assign a corner to a particular wide receiver. If they do decide to 'assign' a corner, I'm curious to see if DRC draws Randy Moss. His athleticism would seem to match up better with Moss and he's also got a considerable height advantage over Hood (6'2 to 5'11). That would certainly be a huge test for a kid with only a handful of starts under his belt, but I'd love to see how DRC handled the challenge. 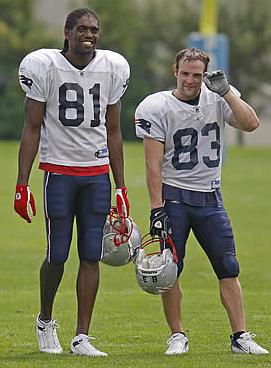 Anyways back to the topic at hand, the Cardinals will have thier hands full with Moss and Welker but it's not an impossible task. Moss has been held under 30 yards in four games this season (Pats are 1-3 in those games) and he's been under 60 yards in three more games. When Moss has a really good game though (over 100 yards and/or multiple TDs) the Patriots are 5-0. As for the little guy, Welker is much more consistent. He's caught between six and nine passes in 12 of 14 games this season, but oddly enough he's not getting into the end zone very much this season (only 2) despite catching over 100 passes already. The keep to keeping these guys under wraps is preventing Moss from getting deep and solid tackling on Welker. The Cardinals have been doing a better job of tackling in recent weeks but they'll have to give a max effort to keep Moss from getting deep.

A wildcard to the secondary's success will be how well the front seven and shut down the Patriots running game and pressure Matt Cassel. Too often in recent weeks the Cardinals have had to rely on blitzes from Adrian Wilson and even Antrel Rolle to apply pressure but the deep threat of Moss should limit those opportunities. Cassel's been sacked 45 times this season, including six games with four or more sacks, so he is vulnerable to a decent pass rush.

The weather will make it more difficult for either team to throw the ball with regular effectiveness but this is the type of game when the Cardinals need thier secondary have a good game. Can they do it? How would you attack Moss and Welker? Would you like to see DRC manned up on Moss all game long?