Share All sharing options for: Jerheme Urban wins Cardinal of the Week

Jerheme Urban has won Arizona Cardinal of the week for week 15. He becomes the first offensive player to win the award. Urban caught three catches for 82 yards and 1 touchdown against the Minnesota Vikings last Sunday. He received 19 votes which was 55% of the total amount of votes. With a chance that Boldin may not play on Sunday, now is the time for Urban to build on his performance against a banged up Pats secondary. Congrats to Urban for earning the RotB award. 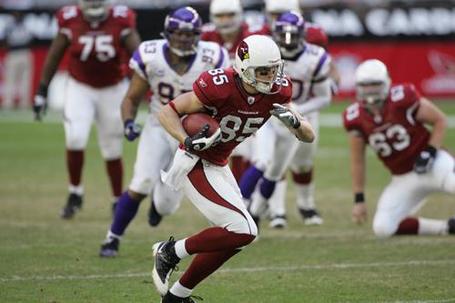