At this Point, I Knew the Arizona Cardinals were Doomed.....

Share All sharing options for: At this Point, I Knew the Arizona Cardinals were Doomed.....

First lets be clear, the Arizona Cardinals lost by 40 so there's not a single play that you point to and say "this is why they lost." They got out hustled, out coached, out played and out classed. We knew that the Cardinals would have to play a near perfect game in order to beat the Patriots in that kind of environment and they were so far from perfect that it wasn't even funny. With all that being said, there was a point early on during the game when I knew the Cardinals were doomed for failure. To set up the scenario though, the Cardinals get the ball first it's pretty clear that 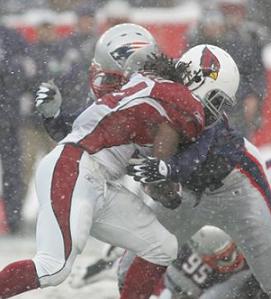 they're game plan is to establish a running game. (Why the worst rushing team in the NFL would try to pound the rock all of a sudden, I don't know.) Regardless though, three Tim Hightower runs results in three yards and a punt. A relatively short, line drive punt (41 yards) would result in a 28 yard return by Wes Welker and the Patriots are set up at the Cardinals 33 yard line. The Patriots commence to pounding the rock and six plays later (five of which are running plays), the Pats punch it in the end zone for six. So a rough start but seven points isn't a huge deficit so no big deal, yet.

The Cardinals started their next drive at the 35, after a good return by Breaston, and two Hightower runs has the Cardinals facing a 3rd-and-2. With snowing bellowing from above, Hightower gets the ball again on third down and follows a Terrelle Smith block over left guard for a nine yard gain and a first down. I immediately think "Ok, maybe we've got something hear," but then the dreaded words, "Oh wait, there's a flag." The penalty would be illegal hands to face on Smith and after a quick replay the guys in the booth, and I'm sure every Cardinals fan watching, were shaking their heads in disbelief. Not only did Smith not grab or even touch the face mask of the defender, he didn't do much to block him. The linebacker (Mayo, I think) went low and Smith basically pushed/fell on him to get him out of the hole. The result though was a ten yard penalty and on 3rd-and-12, Warner's pass would skip in front of Early Doucet, who wouldn't have been close to a first down anyways. The Cardinals would punt and the Patriots would start they're second drive around midfield. On the Patriots first play, a couple of different defenders break through the line and drag Sammy Morris down for a one yard loss. The defense is looking fired up and almost confident. The very next play though would be a short screen pass to Morris who ran across the field, juking Darnell Dockett in the process, and down the sideline for a big 42 yard gain.

In that one play, it looked like all of the life got sucked out of the Cardinals defense. The Patriots scored five plays later and the Cardinals were in a 14 point hole. As we know now, the game would get much worse but in those four minutes between the penalty on Terrelle Smith and the 42 yard catch-and-run by Morris, the sinking feeling of impending disaster crept over me. The next two hours would be painful to watch but I guess by now we're used to it. When did you know, for sure, that the game would end badly for the Cardinals?