Share All sharing options for: Arizona Cardinals Look Ahead 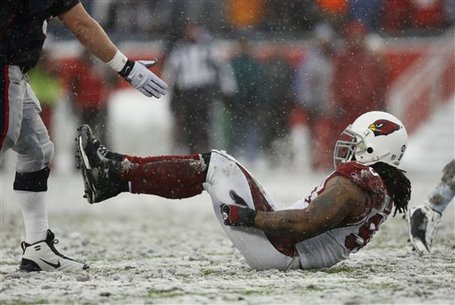 After a 47-7 blowout, people are starting to wonder about a team that started off 7-3 that now has lost 4 out of the last 5. With the playoffs around the corner, they need a helping hand...fast.

- Ken Whisenhunt thought that a combination of the snow and a Cardinals team that just won the division were a result of the recent poor play.

- Antrel Rolle piled up another 10 tackles, improving his poor tackling from earlier in the season. He now has 83 tackles for the season.

- Matt Leinart came in a performed better then Warner. Ken Whisenhunt stated after the game that Leinart's communication device in his helmet was malfunctioning for the first couple drives. All Matt could hear was loud static noise. Once the earpiece was fixed he obviously played better and threw a beautiful touchdown pass to Fitz.

- No significant injuries. Only notables were Ware, Francisco, Spach and Hood. All are fairly probable for next week. Whisenhunt noted that JJ and Q will probably play against the Seahawks on Sunday as well.

- The past is the past and frankly, I don't think anybody wants to keep talking about the Patriot game.

With one game left against a poor team, the Cardinals can ask for nothing better then a win for Christmas. They can easily use this game to experiment the offense before the playoffs and rest certain starters. One of the most important parts to success is the fans. With morale down, it's tough to support a team playing as poorly as the Cardinals. We need to keep the faith and stay positive. The past cannot be changed and whether we like it or not, the playoffs will come and go. Hopefully the Cardinals will be ready.