Pro Bowl Update and the Case for Karlos Dansby

Share All sharing options for: Pro Bowl Update and the Case for Karlos Dansby

With only a week left in pro bowl voting, there are a few Arizona Cardinals that deserve some consideration. Mike Sando has posted a nice spread sheet showing the top 5 vote getters at each position. At this point, Kurt Warner, Larry Fitzgerald, Anquan Boldin, and Adrian Wilson look like locks to make it. Sean Morey is up there but needs a strong push. This then leads me to one of our daily segments for this week only. 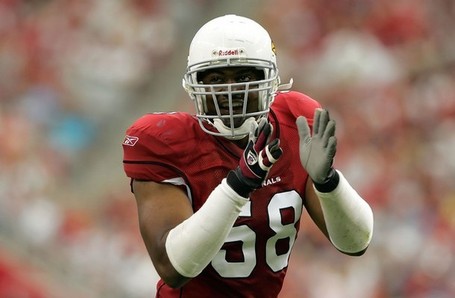 Other sites have decided to promote some of their stars to get them into the pro bowl. Today we are focusing on Karlos Dansby. With the help of some fans, he may have a shot at making the pro bowl. He currently is one of the most talented players on the defense. He usually gets overlooked due to other stars in the NFL, but what he brings to this defense should not be overlooked. He currently leads the team in tackles and is one of the teams top playmakers. As you can see here, he is very versatile and can help wherever needed. Lets do whatever we can to get him into the Pro Bowl.

Best Game: at Carolina - He led the team with nine tackles, including six solo, but his biggest impact came on a blitz. With the Cardinals leading 3-0 early in the second quarter and the Panthers facing a 2nd and 15, Dansby blitzed up the middle, avoided a back trying to pick him up and stripped an unsuspecting Jake Delhomme. Dansby recorded a trifecta (sack, forced fumble and fumble recovery) and the Cardinals offense was set up at the Panthers' five yard line. They'd score on the very next play and go up by ten, but we all know how that game turned out.

Honorable Mention: San Fransisco - Dansby again led the team in tackles with 10, seven solo, but he also recorded a play that quite possibly changed the outcome of the game. With five minutes to go in the fourth quarter and the Cardinals trailing the Niners 23-24, Dansby stepped in front of a Shaun Hill pass and returned it 34 yards to the five yard line. The Cardinals would score two plays and take a lead that they wouldn't relinquish.