Share All sharing options for: Atlanta Falcons at Arizona Cardinals: At First Glance

We all know what this Saturday will mean for the Arizona Cardinals franchise, it's fans and the community, but what do we know about the Atlanta Falcons? The two teams played at the end of last season and in fact they've faced each other three times in past four seasons but that doesn't mean that either team will look familiar. The Falcons of 2008 don't resemble the team finished 4-12 last season while going through three quarterbacks and two head coaches. A new head coach, a rookie QB and a big free agent running back turned the Falcons from a laughing stock into playoff contenders seemingly overnight. So what can the Arizona Cardinals expect to see on Saturday?

Atlanta Offense: Overall the Falcons are pretty balanced. They're led by the running game and Michael Turner. Turner's 1,699 yards this season were the most by a Falcon runner since Jamal Anderson's 1,846 in 1998 and his 17 touchdowns set a new franchise record. Backing up Turner is the speed demon known as Jerious Norwood who's also had a good season with nearly 500 yards on less than 100 carries. When the Falcons pass, Matt Ryan has been as good a rookie quarterback as anyone could have expected. His 3,440 yards ranked 6th all-time on the Falcons' franchise record book and his 87.7 QB rating also puts him in the top 10. Ryan hasn't been prolific this season but he has led a couple of fourth quarter comebacks and he led a 55 yard drive in overtime to beat Tampa Bay. When Ryan throws the ball, he normally finds Rowdy Roddy White and his 1,382 yards set a new franchise record (noticing a pattern here). White is Ryan's primary target most of the time considering that no other receiver had over 800 yards and third on the receiving list is Norwood with 338 yards. The Falcon offensive line is very good considering that they've got the #2 ranked rushing attack and Ryan has only been sacked 17 times. 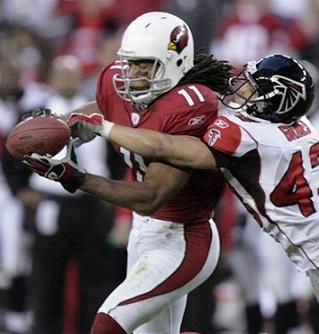 Atlanta Defense: The Falcons run a 4-3 defense and you've probably never heard of most of them. The defensive line and pass rush is led by John Abraham and his 16.5 sacks set another franchise record. The middle of the defensive line is anchored by Jonathan Babineaux (6'2 284) and massive Grady Jackson (6'2 345). Babineaux is a decent pass rush threat from the defensive tackle spot but Jackson is a two down player who can get worn down towards the end of games at his age (35). The linebackers are an interesting group headlined by long time Falcon, Keith Brooking. He's been a Falcon since 1998, hasn't missed a game in eight seasons and has had at least 100 tackles in each of those eight years. Next to Brooking in rookie Curtis Lofton, a rookie from Oklahoma. Lofton isn't the best athlete on the field but he's simply a football player who knows how to get the job done. In the Falcon secondary, the corners are young and athletic but undersized. Chris Houston (24 yrs old) is the bigger of the two corners at 5'11 and he's finishing up his second season. Brent Grimes (25 yrs old) is opposite of Houston and his 5'10 185 pound frame should make him a favorable matchup against either Larry Fitzgerald or Anquan Boldin. At safety the Falcons have long time veteran Lawyer Milloy (although his status for the game is in question) and Erik Coleman. Milloy is hard hitting, sure tackler and the Falcons missed his presence last week when the Rams ran for 202 yards.

The Cardinals will certainly have their hands full with the Atlanta Falcons, both offensively and defensively. The Falcons are a balanced team with an interesting mix of proven, established veterans and young rookie or first year starters. It'll certainly take a solid, all around effort from the Cardinals to send the Falcons home with a loss. All that being said, we talked the past couple of weeks about who we wanted the Cardinals to face in the first round and the Falcons were seen as a favorable match-up. Do you still feel the same way? What worries you the most about these Falcons?