Dominique Rodgers-Cromartie Should be the Defensive Rookie of the Year

Share All sharing options for: Dominique Rodgers-Cromartie Should be the Defensive Rookie of the Year

I know the Arizona Cardinals aren't in their off season mode yet but the post season awards are starting to pop up (props to Matt Ryan) and it's only fair the Dominique Rodgers-Cromartie should get consideration as the defensive rookie of the year. Rodgers was supposed to have a steep learning curve to the NFL level and as recently as week six we were talking about him struggling, but he's turned it on as a starter. DRC 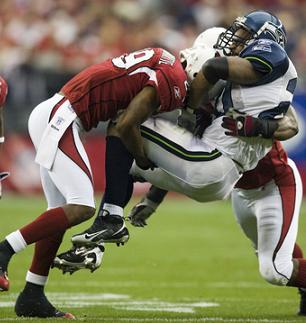 finished his rookie year by starting the final 9 games after picking up a couple of spot starts early in the season when teams started the game in spread formations. DRC finished the season by leading all rookies with 23 pass breakups and tied for the league with four interceptions. He also ranked in 13th among rookies with 42 tackles and was the only rookie to block a field goal. To help his case, three of his interceptions came in the closing minutes of games to seal a victory for the Cardinals, including the 99 yard 'pick-six' that finished off the Rams.

Jerod Mayo: Mayo started every game for the Patriots and finished with 128 tackles and a forced fumble. Outside of that though he didn't register a sack, a pick and he only broke up four passes. His best game was a 20 tackle game against the Jets that included 16 solo tackles.

Chris Horton: If we were talking about best value in the entire draft, Horton would win by a unanimous decision. He was the 249th player selected in the draft (only 252 were picked) and he went on to play in 14 games with 10 starts at strong safety for the Redskins. He finished with 76 tackles, a sack and three interceptions. He twice recorded ten tackles or more but his best game was the second week of the season when he recorded a fumble recovery and two interceptions including one in the final minutes to seal a victory over the Saints.

Curtis Lofton: Lofton's season is much line Mayo's but with not as many tackles. He finished the season with 94 tackles, a sack and three passes defended. He played in all 16 games with 15 starts for the Falcons. He didn't have a truly great game but he recorded at least six tackles is 11 games this season.

Aqib Talib: Talib played in 15 games, just two starts, but that didn't stop him from tieing DRC for the lead in picks among rookies with four. He only recorded 23 tackles though and he only defended 13 passes. He didn't have a really breakout game either considering that his picks were spread out among four games and he never recorded more than three tackles in a single game.

We'll look at DRC's season in more depth when the season is actually over but for now, this kid deserves his props. He's been the best play-making, game-changing defensive rookie in the NFL this season and especially over the second half of the season. Agree? Are there any other worthy candidates that I missed?