Atlanta Falcons at Arizona Cardinals: What the Offense Must Do to Win

Share All sharing options for: Atlanta Falcons at Arizona Cardinals: What the Offense Must Do to Win

The offense, and more specifically the passing offense, has been the breadwinner of the Arizona Cardinals this season and this Saturday should be no different. It's probably safe, and fair, to assume that the running game isn't going to explode for 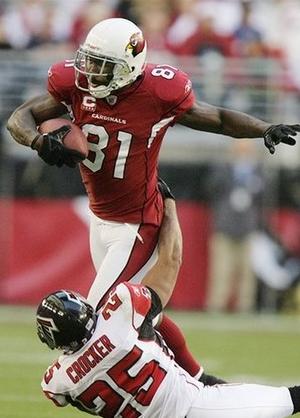 150 yards and the defense isn't going to pitch a shutout. Knowing that leads us to the next obvious assumption, the Cardinals chances of advancing rest squarely on the right shoulder of #13. His ability or inability to move the offense, protect the football and keep the ball away from Matt Ryan and Michael Turner will be a huge factor in determining whether the Cardinals are making travel arrangements to either New York or Carolina or trying to get a good tee time at their local course. So what does Kurt Warner and the offense as a whole have to do take pressure off the defense and help ensure a Cardinal victory?

1. Get off to a quick start: I can not stress the importance of this enough. The Cardinals offense needs to get ball first and they need to score first. If the Cardinals can put points on the board first, the effects will be felt by the Cardinals' defense and the Falcons' offense. For starters, the Arizona defense isn't greatness, we all know that, but they are a significantly better unit when they're playing with a lead. It would take pressure off of our defense and put pressure squarely on Matt Ryan and an offense that is built to play with a lead or in a tight game. So how do they jump out to any early lead? Be Aggressive. We saw the offense start slow last week and they didn't get on a roll until Warner started taking shots down the field. He'll have a full arsenal this week with Boldin returning and it's time to open it up and let this offense fly.

2. Control John Abraham: It seems simple, shut down their best pass rusher and keep KW upright, but I can't help but think about how they handled (or didn't handle) Jared Allen. We talked about it leading up to the Vikings game that Mike Gandy would need help with Allen but the Cardinals' gameplan seemed to center around leaving Gandy alone on an island. Allen ended the game with two sacks and if they don't give Gandy some help this week, John Abraham will have the same type of game. Allen and Abraham are pretty similar players both in size and style of play, although Allen is obviously more accomplished. Abraham is the primary pass rusher for the Falcons with 16.5 of their 34 sacks and he likes to get his sacks in bunches. Eleven of his sacks came in four games this season. The Cardinals will have to commit to helping Gandy on passing downs with either a back or a tight end.

Fast Fact: Atlanta is 9-1 when Abraham gets at least half a sack. 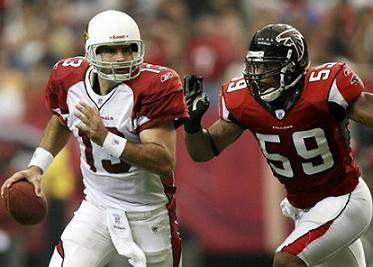 3. Protect the football: We know that Kurt Warner and company can put points on the board and they should be able to put up a 'winnable' number of points against the Falcons defense. Atlanta's secondary shouldn't be able slow down the passing game very much but one thing that every Cardinal fan should be worried about is, can Kurt Warner protect the football for four quarters. The Falcons aren't the most prolific team in terms of creating turnovers with just 10 interceptions (27th) and eight recovered fumbles (20th) but their offense also doesn't turn the ball over very much. KW will have to make smart decisions in order to keep Atlanta from getting a short field and putting unecessary pressure on the defense.

Fast Fact: Atlanta is 4-0 when creating multiple turnovers and 1-3 when not creating a turnover.

All of that may seem very simple and obvious but if the Cardinals can play smart, fundamentally sound football for four quarters they should beat the Atlanta Falcons. There isn't a huge talent gap between these two teams and as Hawk said earlier in a comment, "the game will simply come down to who makes the fewest mistakes." Any other keys? Can the Cardinals accomplish these three goals?