To Scheme or not the Scheme: I'm sure that Whisenhunt never would have guessed that he'd be the head coach of the worst rushing team in the entire league but that's where he sits today. A combination of poor production and tailoring the offense to fit it's strengths has led to an awful lot of shotgun and multiple receiver formations. As a result they've had to rely on shotgun draws for the bulk of rushing plays and they're rarely able to get Terrelle Smith on the field outside of goal line or short yardage situations. Perhaps it's a no-win situation considering that boosting the running game might mean taking Warner out of shotgun and less playing time for Steve Breaston but if they're intent on improving the ground game, that might be what it takes. It's true that the power-I formation isn't the only way to run the ball but sometimes when a unit is struggling as bad as the Cardinals ground game is right now, going back to basics and simplifying the plan is the best course of action.

Personnel: It's hard to say the coaching staff hasn't tried all of their options at this point. They started the season with Edge as the starter, Hightower as the finisher and Arrington not even playing. They since tried just about every combination including Hightower as the starter, Arrington as the change of pace and Edge not playing. Despite the change though, the results have been pretty much the same. The Cardinals simply can run the ball with any consistency.

Looking at the three options, there's no clear cut front-runner. Edge and Hightower seem to be very similar in terms of overall production. Hightower's overall average is dragged down by his high number of goal line and short yardage carries, but his ability to break tackles and break off the occasion big gain is something Edge can't match. Hightower's biggest advantage is his upside though because he's only a rookie and will get better with time and experience. On the other hand, Edge is a more conservative runner and his style leads to less plays that result in negative yardage. Arrington's the wild card because we haven't seen enough of him to know if he can keep up that production. When he has gotten the ball he's been impressive. I never thought I'd hear whispers that Arrington should be the starter but the murmurs are growing and if the Cardinals want to stick with this 'spread' offense that they're running right now, he might just be the best option. 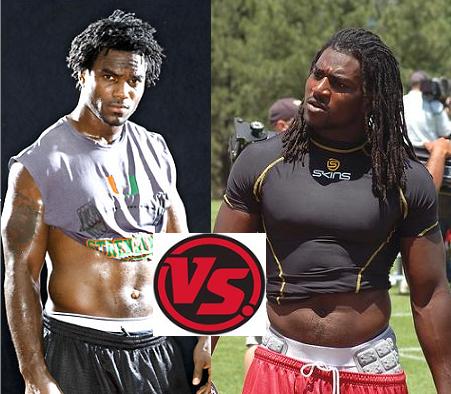 Offensive Line: Since it's completely unfair to talk about a struggling running game without mentioning the offensive line, they've been poor at best. The problem with the offensive line though is that there's not much you can do to change them right now. The only backup that's even partly worthy of starting consideration is Elton Brown but he'd be replacing Deuce Lutui, who's strength (at least in my mind) is run blocking. It's possible that the line will improve with time considering that Levi Brown and Lyle Sendlien are second year players but marginal improvement isn't enough to bring the running game into respectability. Wholesale changes could come in the off season, including moving Brown to guard, drafting a couple of guys early and giving Brandon Kieth a serious look, but for this season we're stuck with what we've got. The only part of the offensive line that could be changed would be the tight ends. The coaching staff have shuffled them in and out more often than sun shines in Arizona. Injuries have played a big part in that but all around lack luster play and poor production has been the results with each one. Ben Patrick and Leonard Pope aren't good enough blockers to make any kind of difference and Jerame Tuman and newly acquired Stephen Spach aren't good enough receivers to fit the offensive system right now.

The bottom line is pretty bleak: the Cardinals are going to continue to struggle running the football for the rest of the season (I know, real breaking news, right?). Whether it's the scheme, personnel or a combination of both, I don't see the results changing that much in the next four weeks. That doesn't necessarily mean that this team is doomed for failure though, as we all know the Cardinals still have one of the best offenses in the league (3rd in yards per game) and they still do a decent job of controlling the clock (11th). Improvements are needed, there's no doubt about that, but there is more than one way to skin a cat. Who deserves the blame in your mind and is there any way to improve the running game with this current cast of characters?