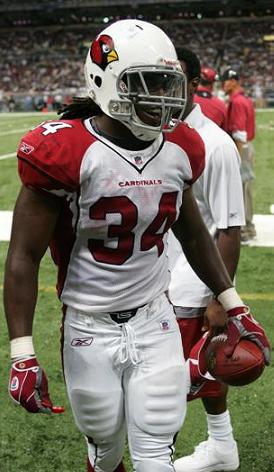 run.   This Sunday something has to give.  After Thursday's pathetic 25 rushing yards, the Cardinals finally rank dead last in terms of yards per game and yards per rush, a trend that the team has trying to change since Edgerrin James was signed. Their 76.4 yards per game and 3.3 yards per carry are even more discouraging considering the success of the passing game. Normally you'd expect the passing game to open up some running lanes but for the Cardinals, the ground game goes nowhere. The Rams on the other hand rank 30th in the league in terms of stopping the run (161.8 yards per game). They've allowed seven backs to top 100 yards this season, including Tim Hightower in his first career start, and allowed over 200 yards four times. To make matters worse for the Rams, they don't seem to be getting better as the season progresses. Since they played the Cardinals, five weeks ago, they're allowing almost 175 yards per game on the ground and the Giants and Bears topped 200 yards rushing.

For the Cardinals to cure their running game woes, it'll take a better effort from everyone involved. The play calling will have to be less predictable and the coaching staff needs to put players in a better chance to succeed. If that means less shotgun and less four receiver-sets then so be it.  If that means lining up in a traditional Power-I formation and letting Terrelle Smith get a significant number of snaps, then so be it.  They'll also need a better showing from an offensive line that's struggled to open holes all season.  From all five members of the 'front wall', they need them to step up and play a physically dominating game. The Rams have a small defensive line (avg weight 281), so there's no reason to get cute, they just need to line up and run right at them. Last but certainly not least, the trio of Tim Hightower, J.J. Arrington and yes, even the once savior Edgerrin James need to run with power and aggression.  They've had success against the Rams before and they can do it again, if everyone steps up their respective games.

The Cardinals will be trying to get a bad taste out of their mouth after two demoralizing losses and 10 days off to ponder where they stand among NFC contenders. They've had the NFC West title within their grasp 12 days now and perhaps it's fate they face the team that now inhabits the town in which they last won a division title.  A productive running game will smother the Rams as well as control the clock and give the Cardinals some confidence heading into a pivotal play-off seeding match-up with the Minnesota Vikings.