Hell has truly frozen over:  the Arizona Cardinals have won the NFC West and will host only their second playoff game ever, the first since the days of the Million Dollar Backfield. 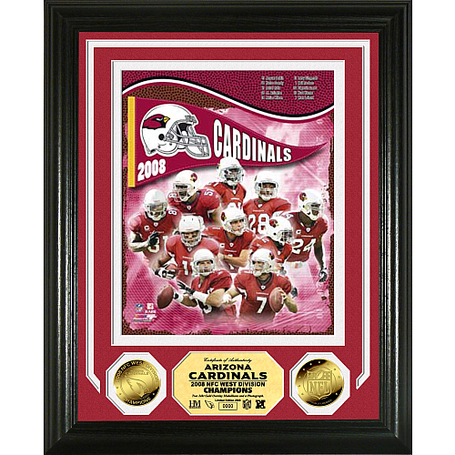 After two weeks of teasing with the division crown, the Cardinals finally took care of business at home against the city that was once home, St. Louis.  The Cardinals took a quick two touchdown lead against the rival Rams and a 20-7 lead into halftime before Dominque Rogers-Cromartie's 100-yard interception return for a touchdown sealed the victory.

Some random thoughts on the game after the jump!

MVP Performance?  Kurt had another solid game, completing 24 of his 33 passing attempts for 279 yards with a touchdown to Larry Fitzgerald.  He did throw one interception which led to the Rams' touchdown.  Kurt's arm was 83% of the Cardinals offense, a number that gives credit to his MVP qualities in addition to the playoff birth.  Warner's numbers could have been even more dominating if not for holding penalty, one foot out of bounds, and not controlling the ball all the way to the ground (Breaston's long screen, his "almost" TD, and JJ's first down catch denied).

Cardinals' Defense Strips & Scores  Gerald Hayes forced two Steven Jackson fumbles, one of which was returned by Darnell Dockett for a TD.  Rogers-Cromartie's long interception aided the cause.  The defensive line didn't get the pressure on Marc Bulger like they did last time but were stout against the run aside from one breakout run by Jackson for 32 yards.

Special Teams  Overall, the Cardinals were better.  JJ Arrington was solid on the kick-off returns.  Neil Rackers showed no hesitation on his two field goals and also had a flying tackle on coverage.  Ben Graham boomed three punts, two that were fair caught inside the twenty.  One punt was deep and quick that allowed the Rams to get a decent return.  Still some tackling issues on coverage that need to be worked out.

Where art thou running game?  All of us here on Revenge of the Birds figured the Cardinals would focus on the run.  That seemed to be the case on the first drive for a touchdown as Tim Hightower and J.J. Arrington were in the mix for half the yards on that initial drive.  Edgerrin James even had a couple of nice carries back to back for a first down on the second drive.  Yet after Warner's interception, the run was called sparingly.  With 80% of the Cardinals' offense coming through the air this season, the hope that a running game will materialize before the playoffs may be in vain.

Gadgets  The Cardinals used Anquan Boldin a bit in the backfield once more.  Antrel Rolle registered a reception that wasn't canceled by a penalty.  Todd Haley continues to try out some gadget plays, giving future opponents something more to study in meetings.  Perhaps the real gadgets are being set up now for execution come January.

The Cardinals are playing a significant game in January for the first time since 1999.  Whether today's game has helped to set the table for the NFL's second season remains to be seen.  At least we know the Cardinals can bring something more than sporks to the table!  Congratulations to the 2008 Arizona Cardinals and to all of the hardy Cardinals fans that finally have something to ask for this Holiday Season.  What stood out most for you during this history-making victory?