The Arizona Cardinals are NFC West Champions!!! No Really, They Are...

Share All sharing options for: The Arizona Cardinals are NFC West Champions!!! No Really, They Are...

Congratulations to the Arizona Cardinals. 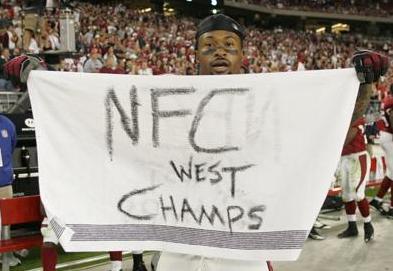 Congratulations to fans of the Arizona Cardinals.

After 33 years of futility, frustration and failure, the Arizona Cardinals have officially earned the title of "CHAMPIONS." Thirty-three years!?! How significant is that? Well consider that only four players on the roster were even alive 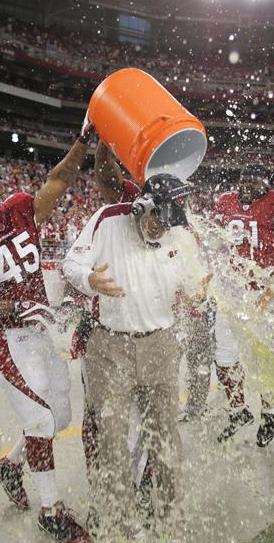 the last time the Cardinals won their division. Current head coach Ken Whisenhunt, who should be nicknamed 'Savior', was not even a teenager yet and current coordinators, Todd Haley and Clancy Pendergast, were most likely perfecting their multiplication tables. So what's the point? It's been a really long time since the Cardinals could call themselves Champions and we won't even go into how long it's been since they hosted a playoff game (1947, for the record).

As for yesterday's game, the Arizona Cardinals did what they had to do to get a win. It wasn't the best game that the Cardinals have played but it was effective. Kurt Warner had another great game, completing over 72% of his passes for a touchdown and an interception. He spread the ball around evenly with Larry Fitzgerald, Anquan Boldin and Steve Breaston each registering at least five receptions and combining for 225 yards. Those three guys have already made their case for being the best trio in the league and they just cement themselves as the pinnacle of the NFL every week. As for the defense, all they did was hold the Rams to 10 points, force three turnovers and score two touchdowns of their own. They didn't get a ton of pressure on Bulger but they forced two Steven Jackson fumbles and held the Rams' running game to just 85 yards on 24 carries (3.4 ypc).

In my mind, the defense was the story yesterday and two guys really stood out as having great games:

Gerald Hayes: Hayes is often the forgotten linebacker of the Cardinals but he played a great game. He not only led the team in tackles with 11, but he also caused both fumbles and registered half a sack. Six of Hayes' tackles were for one yard or less including his half a sack and one of the caused fumbles.

Dominique Rodgers-Cromartie: DRC had some people questioning him early in the season, but he's proving that patience really is a virtue. He matched his season high with five tackles, but his play of the game was a 99 yard pick-six. DRC jumped in front of a Marc Bulger pass late in the fourth quarter and turned on the jets heading down the sideline. That marks his third interception of the season, all of which have come in the past four games, and he recorded two pass breakups. He now leads the team in interceptions and pass breakups.

The Cardinals certainly still have more work to do this season, but for now being able to utter the word Champion is a special feeling. Savor this feeling Cardinals fans, it's been a long time coming. What did you do to celebrate (or are you still celebrating)? Who's ready to see a playoff game in Arizona?