Getting to Know: Gerald Hayes

Share All sharing options for: Getting to Know: Gerald Hayes

In the last segment of the Arizona Cardinal player profile, we featured wide out Anquan Boldin. In light of his recent performance, Gerald Hayes will be the featured man. He may not be the star of the team, or the most talked about player, but he is an important and dependable middle linebacker. Gerald is the type of linebacker that head coach Ken Whisenhunt loves to have on his defense. A tough, hard-nosed player, who will get to the ball carrier one way or another. Hayes recently had one of his best games of the year against the St. Louis Rams this past Sunday recording 11 tackles, 2 forced fumbles, and half a sack. 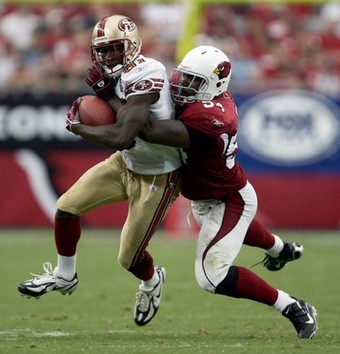 Hayes played his high school ball at Passaic County Technical Institute where he was an All-State linebacker. He then went on to the University of Pittsburgh, and became a three-time All-Big East Conference selection. He majored in Administration of Justice.

The Cardinals took Gerald in the 3rd round of the 2003 draft. He was the 70th overall pick. He did start off slow his first two seasons, recording only 48 combined tackles. In 2005 he was forced to sit out the entire season due to an injury. His 2006 season may be considered his "break out" year, when he piled up 80 tackles, 3 INTs, and 1 sack in just 14 games. Since then he has become a solid piece to this Arizona Cardinals defense. He is a grind-it-out player, who can be depended on to play his hardest every game. He's recently been recognized for his play this past Sunday, being not only nominated for Defensive Player of the Week by the NFL, but the coveted Arizona Cardinal of the Week by RotB. We can certainly expect to see Gerald Hayes in a Cardinal jersey for years to come, hopefully along with more playoff games.