Youth is hot commodity in today's NFL, especially at the quarterback position so it's not everyday you see two quarterbacks with as many years between them as Arizona Cardinals' Kurt Warner and the Jets' Brett Favre. With 75 years of age and 28 seasons in the NFL between them, it's fair to say that Warner and Favre have seen it all. Both quarterbacks have been to two Super Bowls, winning one of them and they're both with their third team. They've both been the league MVP multiple times (Favre with 3, Warner with 2) and have combined for 12 Pro Bowls. They've combined for over 87,000 yards and 606 touchdowns over the course of their careers and both are still putting up really good numbers. 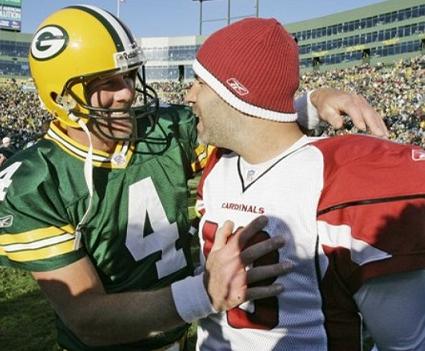 While Warner and Favre took very different paths to NFL stardom, they ultimately become very similar 'gun-slinger' quarterbacks. One thing that makes Warner and Favre even more similar is how much their current day teams depend on them. The Cardinals and Jets aren't going to win many games running the football or playing "lights out" defense.

It will be interesting to see how each defense plans to attack their opposing quarterback considering that the game could very well come down to which quarterback has the better game.

With that in mind, here a breakdown of Warner vs. Favre:

While both quarterbacks have rocket launchers hanging from their shoulder, Favre may have the strongest arm in the entire NFL (even at the age of 38). He was known spraining and even breaking the fingers of his receivers in Green Bay and while he has learned to put some touch on his shorter passes, he can still throw a fastball better than anyone. There probably aren't many quarterbacks in this league who can match Warner's arm strength but Favre is definitely on that short list.

This is another tough one but accuracy would have to go to Warner. His career completion percentage is much better (65.1% vs. 61.5%), even though Favre's been very good in that department through three games (70.0%). Warner's accuracy was his strongest attribute in Mike Martz's offense during his days in St. Louis and he's always been known for being able to fit the ball perfectly in the tighest of windows. Favre's accuracy might be a little better if he occasionally took some off his fastball because he, even after all these years, will overshoot a receiver on occasion.

: Honestly if there was a third option, you'd probably have to take that one. Warner and Favre are both classic 'gun-slinger' quarterbacks who put up eye-popping numbers but are terribly prone to turnovers. They've both averaged more than an interception per game in their career (1.05 for Warner and 1.12 for Favre) and their TD to INT ratio is even closer (1.54 TDs per INT for Warner to 1.56 for Favre). If I've got to pick one of them though, I'll go with Warner based on this years performance.

This has to be Warner but it's probably closer than we think. Obviously Fitz and Q are the best two receivers on either roster but the Jets' duo of Cotchery and Coles are better than most of us realize. If we move the tight end the match-up gets even tighter considering the Jets have the more accomplished group and a promising rookie. At running back, both teams have a tailback in the twilight of his career but I'd take the combo of Edge and Hightower over Jones and Washington. Overall the Cardinals' receivers make this a no contest win for Warner.

The biggest difference between Warner and Favre is durability. We all know Favre played in a million consecutive games and Warner might as well have FRAGILE stamped across his forehead. Any way you look at this match-up though it should be an entertaining battle of veteran quarterbacks. Both teams will need solid performances from their signal caller and the outcome of the game could ultimately depend on which quarterback makes the fewest mistakes. Thoughts? Agree/Disagree?