The Arizona Cardinals and Jets don't play each other very often, once every four years to be exact, so there are plenty of new faces on both sides of the field that we could preview. One guy stands out in my mind though as a key to the Jets' success, Kris Jenkins. The Jets spent much of the off season wheeling and dealing and a 1-2 record through three games has to be somewhat disappointing, but Jenkins is one guy who has lived up to his expectations. 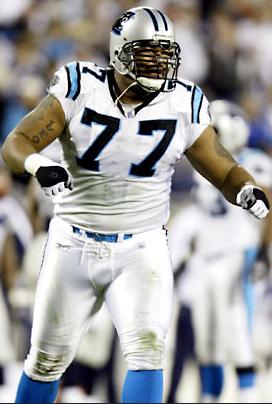 the quickness to break through them to cause havoc in the backfield. He may not be the same player that he was his first couple of seasons in the league (averaged 41 tackles and 4.66 sacks per season in first three seasons), but when he's healthy he's a top tier defensive tackle. Jenkins not only has all the physical tools to excel but he also plays with a mean streak and can go through portions of a game where's he's unblockable by a single player. While that's obviously a positive, it can lead him to being gassed by the end of a game if he's not rotated in and out.

He's playing well this season considering that he's already battling a bad back (tends to happen when you weigh three and half bills). He had eight tackles and a sack in his first two games before missing much of the San Diego game, finishing with just a single tackle. He's been limited in practice this week but is expected to play. Even Jenkins at 75 or 80% is an upgrade over his backup, Sione Pouha (6'3 325) a fourth year player who struggled holding the point of attack against the Chargers.

When Jenkins is in the game, the Cardinals will have the game plan around double teaming him because he does have the ability to disrupt an entire offense if he's allowed to run roughshot into the backfield. It's no coincendence that the Jet's run defense has allowed almost 50 fewer yards per game this season. Lyle Sendlein will have play a good game and he'll likely need help from either Deuce Lutui or Reggie Wells. With the edge rushers that the Jets have, Warner will need a good pocket to step into if he wants to keep his jersey somewhat clean.