Arizona Cardinals Get Torched By Jets 56-35

Share All sharing options for: Arizona Cardinals Get Torched By Jets 56-35

In the words of Al Pacino, "I don't know what to say really." Just eight short days ago the Arizona Cardinals left home undefeated and riding the high of a blowout win in the home opener. Fast forward to today though and the Cardinals are headed home with a pedestrian .500 record, coming off a game in which they had seven turnovers, eleven penalties and  gave up 56 points. Simply put, the Arizona Cardinals showed up to the Meadowlands yesterday but they obviously weren't there to play NFL-caliber football. 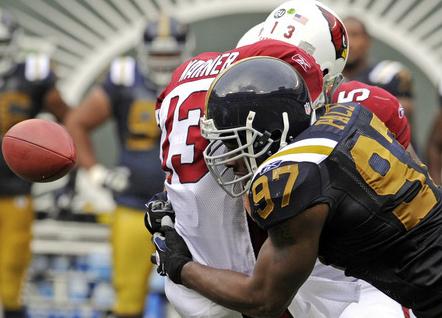 It would be easy to play the blame game today but honestly, I wouldn't know where to start. Kurt Warner ended the game with impressive fantasy stats (472 yards, two TDs) but his six turnovers (3 INTS, 3 fumbles) led to 27 points for the Jets. Days like yesterday are why the coaching staff is afraid to open the offense up for Warner. The running game was largely forgotten once the Jets opened up a 31 point lead, and during the first half it was just as dysnfunctional as the rest of the offense (11 carries for 34 yards in first half). The defense was behind the eight ball for most of the day considering all of the turnovers. The Jets average scoring drive was less than 50 yards, but the way the defense was playing, the Jets could have scored from just about anywhere. The secondary gave up four pass plays of at least 20 yards and the Jets' passing game averaged almost eight yards per play (7.9). The special teams weren't horrible but they were a mixed bag, as we've come to expect. Rackers had a field goal blocked but did convert an onside kick.

All in all this is a game that the Cardinals hope doesn't linger and as a fan I wish there was a way to erase it from my memory. We'll continue to look back at the loss for the rest of the day and most of tommorrow but for now I don't have the stomach for much more analysis.