Arizona Cardinals Lose to Jets 56-35: Who is to Blame?

Share All sharing options for: Arizona Cardinals Lose to Jets 56-35: Who is to Blame?

Obviously when you get your doors blown off, there's plenty of blame to go around and this game was no exception for the Arizona Cardinals. It's easy to sit here the day after an embarrassing loss and point fingers but there's no sense in patting anyone on the back either. Here are the biggest culprits from Sunday's debacle

Kurt Warner: He had to be on the top of this list considering that he ended the game with six turnovers that led to 27 points for the Jets. Not only did Warner prevent his offense from getting into any kind of a rythm, he also put the defense in a no-win situaton time after time. During the second quarter, Warner and the offense had the ball for five drives totaling 34 yards and resulted in two interceptions, two fumbles and one punt. He did come out on fire in the second half leading the offense to touchdowns on five straight drives but there's a reason that teams don't come back from 34 point deficit's very often. Warner may have redeemed him self a bit by having a huge second half but he also proved that you can't teach an old dog new tricks. All of the emphasis on protecting the ball didn't do a bit of good when the heat was turned up.

Levi Brown: Brown is looking more and more like a guy who just doesn't get it and it's just painful to watch him continue to struggle against any pass rusher with a quick first step. He was responsible for several of the hits and fumbles on Warner and I don't understand why the coaching staff doesn't realize that he needs help. It hamstrings an offense when they have to commit a running back or tight end to help an offensive tackle, but that's the only way that Brown can handle speed rushers. I hate jumping on a guy who still only have 15 career starts but he wasn't drafted to be an average player (and that's being generous).

Entire Secondary: The secondary took it's first blow before the game even started when they found out that Adrian Wilson wouldn't be able to play and they never recovered. By the time it was over Favre had a career day throwing for six touchdowns and completing over 70% of his passes. He had four passes over 2 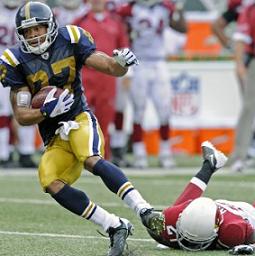 0 yards, ending the day with 8.5 yards per attempt and a QB rating of 123.7. The secondary wasn't helped out by a non-existent pass rush and they got even more short handed when Eric Green missed some time with a knee sprain, but I can't remember the last time that I saw so many receivers running around wide open.

Coaching Staff: I'm one of the biggest Whiz supporters around but I'm dumbfounded about how this team can continue to look completely pathetic on the road. My biggest beef though is with defensive coordinator, Clancy Pendergast. After seeing the defense play fast and loose in San Francisco, we've seen three games in a row of a conservative, "please don't beat us deep" approach. They generated very little pass rush and given how vulnerable the secondary looked, they could have benefitted from a rusher in Favre's face. Penalties continue to be a big problem as well and so many of them are just sloppy, lack of concentration plays.

I wish I could put some kind of spin on this game or some lipstick on this pig but I just can't do it, at least not today. Maybe tomorrow we can talk about the few things that went right but for now all I see is a bad loss. Thoughts? Agree/Disagree? Who else deserves to be on this list?