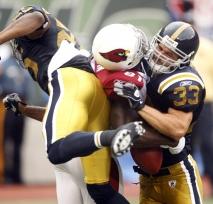 It didn't take long for the league to decide that New York Jets safety Eric Smith should be punished for his vicious hit on the Arizona Cardinals' Anquan Boldin. News came down yesterday evening that the league slapped Smith with a $50,000 fine and a one game suspension. The league said that Boldin was in a "defenseless position" and this offense fell under their new crackdown on "any conduct that unnecessarily risks the safety of other players." For what it's worth, Smith also sustained a concussion on the play.

Boldin was taken to the hospital but he is back home and resting comfortabling, according to Ken Whisenhunt. Players are off today so media access will be pretty limited. It will probably be Wednesday before get an update on his condition and/or his availability for this Sunday. For now, it sounds like Boldin will be back to his old self sooner rather than later and I wouldn't be surprised at all if he's ready to go this Sunday.