The Jets Blew The Doors Of The Arizona Cardinals But It Wasn't All Bad Was It?

Share All sharing options for: The Jets Blew The Doors Of The Arizona Cardinals But It Wasn't All Bad Was It?

Now that we're a full 48 hours removed from the debacle that was the Arizona Cardinals vs. the New York Jets, I feel like I can put on my rose colored glasses and look at the few things that went right on Sunday. Some of these might be nit picking but hey when you lose by 21 points you have to look hard to find the positives. 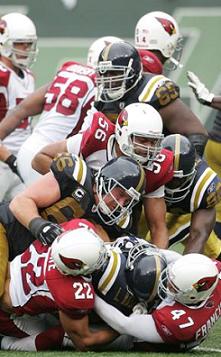 Run Defense: Lost in the confusion of allowing nearly half a hundred points by the defense (remember the offense gave up a pick six), was another impressive showing by the run defense. While some would argue that the Jets simply didn't need to run because the passing game was unstoppable, they did make an honest to establish a running game with 26 attempts. The Cardinals front seven held their own though and allowed just 3.4 yards per carry for a total of 89 yards and those numbers are inflated by a reverse that went for 17 yards. The defense did especially well against Thomas Jones considering that they held him to 46 yards on 18 carries (2.56 ypc).

Fitz and Q: We've come to expect big games from them, especially when Warner throws for as many yards as he did but it's still worth mentioning that they combined for 18 receptions and 241 yards. When these guys are playing their game and the offense is wide open, they're simply unstoppable.

Steve Breaston: After seeing glimpses of how much Breaston had improved from his rookie season, we finally saw him put an entire game together. He ended the game with 324 total yards, thanks to eight kickoff returns, two punt returns and nine receptions. His 38 yard kick off return and 37 yard reception were the biggest plays of the day for the Cardinals. Breaston's still not a great kick returner but if he can average 24 yards a return like he did on Sunday, he'll keep JJ on the inactive list.

UPDATE: Breaston's 324 total yards set a new Cardinals record for total yards in a single game. The previous mark of 284 was set by Ollie Matson in 1954. 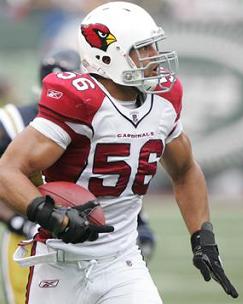 Chike Okeafor: This was by far Okeafor's best game of the year and even though the defense got torched, he made an impact on the game. He finished the game with six tackles, a sack and an interception. His interception and 39 yard return set up the offense at the Jets' 16 yard line when the score was 0-0. The offense couldn't take advantage but that shouldn't take away from Chike's contributions.

Roderick Hood: I'm going to throw his name into the ring to see if you guys thought the same thing. I don't have any stats to back up my argument that he had a good game but I don't remember him getting beat deep and I don't remember him making a single bad play. He finished the game with zero tackles and three passes defended but other than that, there's no way to really grade a cornerbacks' game. Agree?

Some of that may be grasping at straws but there were some positive things that the Cardinals did on Sunday? Thoughts? What else would you include or do some of these guys not belong?