No, You're Not Hallucinating: Arizona Cardinals 33, Carolina Panthers 13

Share All sharing options for: No, You're Not Hallucinating: Arizona Cardinals 33, Carolina Panthers 13

Four minutes into the game with the Panthers ahead 7-0 the majority of NFL fans were smiling and patting themselves on the back thinking the "same ol' Cardinals" had come to play in Carolina.  They were ten point underdogs, 2-19 on the East Coast over the past six years, 0-5 this year, against a Carolina team that was 8-0 at home this season and was "well rested" coming off a first round bye.

The score was 27-7 by halftime...in favour of the Arizona Cardinals.  ::raspberry::  Who saw that coming?

In a game that no one gave them a chance, the Cardinals overcame some early adversity and found their stride using some "gifted" possessions started by Delhomme turnovers.  Delhomme singlehandedly gift wrapped six turnovers (one fumble and five interceptions) that led to 23 points as the Arizona Cardinals blew up in the first half and kept it steady through the second half to rout (yes, I said rout) the Panthers 33-13.

The Cards' first score came the traditional way via solid punting from Ben Graham and a stingy defense that forced Carolina to give the ball right back near midfield.  Kurt Warner handed it off to Edgerrin James for some healthy gains on the ground before connecting with Larry Fitzgerald in classic "jump ball" fashion on the left sideline.  A couple plays later and Tim Hightower is catching a misdirection pass for a tying touchdown.

Then the "other" 1998 Amsterdam Admiral QB started his rash of turnovers on the next Panthers' possession.  As the Cardinals secondary put the clamps the Panthers' receiving corps (Steve Smith didn't get a reception until the last minute of the third quarter), Delhomme stood in the pocket too long against an aggressive Cardinals pass rush and had the ball stripped by Antonio Smith coming around on a spin move giving.  With a short field and a few plays later and James is scoring standing up on a four yard rushing play up the gut.

Early in the second quarter with the Panthers mounting a momentum shifting drive, Delhomme is picked by Dominique Rodgers-Cromartie at the goal line.  A few minutes later it's 17-7 Cardinals.  Next Panthers possession, DRC tips a balls that is tipped again by Steve Smith into the hands of Antrel Rolle.  A few moments later it's 20-7 as Neil 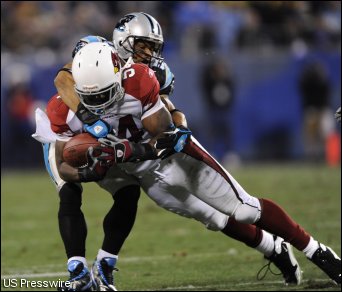 Rackers' leg gets the most work it's had all season (four FGs on the day, a fifth coming a foot short at the end of the first half from 53-yards).  As the congratulatory phone calls start to come into the "Hawk" househould, Gerald Hayes intercepts yet another pass setting up a spectacular TD reception by Larry Fitzgerald to give the Cardinals the 27-7 halftime score.  Larry Fitzgerald had a new Cardinals playoff reception record in the first half, getting 151 of his 166 total yards in the first stanza.

After Fitzgerald recovered an onsides kick allowing Warner to take the "Victory Formation", the Cardinals had done the impossible.  They beat a heavily favoured opponent on the East Coast, in cool wet weather, without one of their best players in uniform, against the team that won the "best" divisioin (in terms of total victories) in the NFL, and they whooped them.  As has been said so many times here at RotB...the playoffs are a whole different beast.  Rely on your regular season preconceptions of a team's ability, and it will get you thinking "draft" quicker than prefered.

Larry Fitzgerald, Predator of Panthers:  What the 'ell were the Panthers' defensive 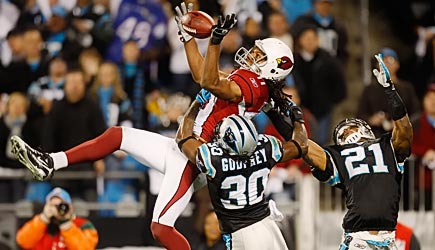 coaches thinking?  No Boldin?  One obvious superstar left on the Cardinals' receiving corps, why not cover him with one guy all the time?  Hell, why not two defenders?!  Judging by Larry's numbers in the second half, that was done but at that point it really didn't matter, especially since Delhomme was convulsing so bad on offense.  Larry Fitzgerald, you are the best wide receiver in the league at this point.  Kudos to you, Q and Boobs for making more opportunities, and to Warner for putting the ball only where you can catch it.

The Lines:  No, not the +9.5 Vegas line, but the offensive line and defensive lines of the Arizona Cardinals.  The Cards doubled up the Panthers' time of possession, something that couldn't happen without the o-line opening up running lanes for James and Hightower or keeping Warner vertical.  Kurt was sacked once and for most of the game had all the time in the world to make a play.  That time of possession wouldn't be so lopsided either if the defensive line didn't keep the pressure on Delhomme.  The final rushing totals also tell the tale of the two lines:  Cardinals 145 yards, Panthers 75.  I ♥ you guys.

The Secondary:  Who didn't get an interception this week?  Adrian Wilson?!  I think Steve Smith's "fireballs and lightning bolts" numbers against DRC speak volumes on the secondary's production aside from INTs:  2 catches, 43 yards, and a garbage TD.

I could ramble on and on about the Cardinals' 9th playoff game ever but I'd rather hear from our few devoted RotB members and the rest of the NFL fans out there that love football for all its eccentric results.  Was this truly a David and Goliath game or is that still yet to come next week...or in three weeks?  Bottom line is that turnovers limit a team's chances; six of them annhilate those chances of victory in a playoff scenario.  It was a great season for Carolina, but I know I'll take the NFC Championship game over a 12-4 regular season record any day!