Arizona Cardinals Pull Off an Improbable Thrashing of the Carolina Panthers: 33-13

Share All sharing options for: Arizona Cardinals Pull Off an Improbable Thrashing of the Carolina Panthers: 33-13

Believe it or not, it wasn't supposed to happen like this. The Arizona Cardinals were supposed to be one of the worst playoff teams the NFL has ever seen. They were led by an old quarterback who struggles when he not in a dome, a running game that's non-existent and a defense that's been very hit or miss. The Carolina Panthers were supposed to be a legit Super Bowl contender. They were playing at home, where they were undefeated, they had a punishing running game and they had a defense that many teams would fear. 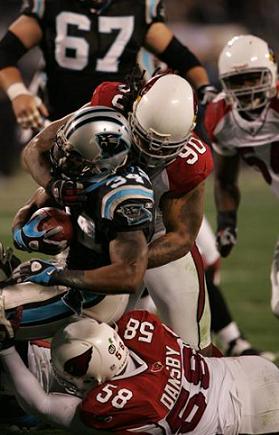 The Panthers were ten point favorites and the Cardinals were simply a speed bump on their way to bigger and better opponents....OR at least that's what every 'so-called' expert sitting in front of a microphone or TV camera was telling us last week.

The Arizona Cardinals apparently heard enough. They showed up in Carolina ready to play and more importantly, ready to get back up after taking a punch. Far too many times this season and in season's past, the Cardinals simply rolled over and played dead after their opponent got the first shot. Exactly three minutes and just five Panthers' offensive plays into the game, I thought we were in store for another 'roll over and play dead' performance from this team. I'm happy giddy ecstatic simply beside myself to admit that I was 100% wrong. Not only did the Cardinals pick themselves up off the mat and brush off the dust, they started taking their own shots. Again and again and again. In fact the Cardinals didn't stop and take a breath until the game was, for all intents and purposes, over. So how dominating were the Cardinals on Saturday?

Well consider that from the 12:00 minute mark in the first quarter until there was three minutes left in the game, the Cardinals outscored the Panthers 33-0. During that stretch the Panthers had eleven drives that totaled 175 yards, including just a single offensive yard in the second quarter. Those eleven drives resulted in four punts, one lost fumble, five interceptions and one turnover on downs. During the same span the Cardinals punted twice but had seven scoring drives (3 TDs & 4 FGs). Bottom line: The Arizona Cardinals did what the Carolina Panthers were supposed to do.

There were far too many guys that had great games on Saturday to name them all. We got solid games from the usual host of characters: Kurt Warner, Larry (best WR in the NFL) Fitzgerald, Karlos Dansby, Bertrand Berry just to name a few. They also got solid contributions from some guys that aren't necessarily 'main stream' players: Antonio Smith, Dominique (I'm going to be a star) Rodgers-Cromartie, Roderick Hood, Ralph (where did this come from) Brown and the entire offensive line. The best way to classify this win though is just to say that it was a solid team effort. Everyone did their jobs. Offense, defense and special teams were all fantastic on Saturday and when this team plays like that, they can beat any team in the NFL. Who else stood out? Who else is having fun telling all the haters that "I TOLD YOU SO" today???