Share All sharing options for: Arizona Cardinals: Where's the Love? 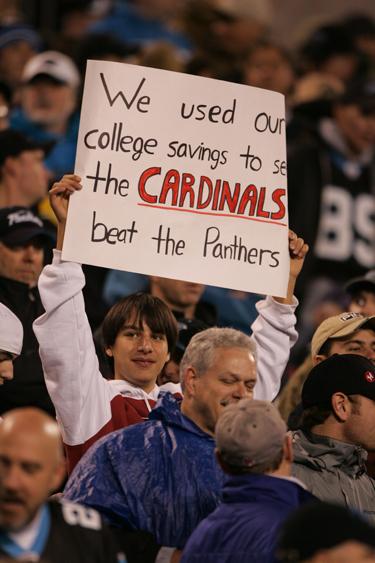 All season long, the Cardinals have heard that same broken record. The Arizona Cardinals are "pretenders", are products of a weak division, will be "one and done" in the playoffs, and the "worst team in playoff history". Well two playoff games have come and gone and the "worst team" is still alive. Where is all this doubt coming from? When a team wins in dominating fashion like they did on Saturday, why are the Cardinals still getting no respect? There are many reasons behind such doubt. Being last in the league in rushing, and being 0-5 on the East coast might have something to do with it. Getting absolutely embarrassed in certain losses during regular season, usually won't win over many believers. Here are some final scores to ponder with:

Looking over these scores can be a bit harmful on the eyes, but it could be a direct reason for the lack of respect of the Cardinals. One thing you must consider is that this team has been in first place in the NFC West all season long. When there is a lack of competition in the division, chances are, the team won't compete at 100%. That seems evident now after two impressive wins over quality teams in the playoffs. It still is disheartening to hear that the Arizona Cardinals are probably going to lose to the Eagles, and will be the underdogs come Sunday. It's not hard to ignore. Almost any article you find will point out the Cardinals flaws. When reading or watching a preview of the game, it's going to be 80% about the Eagles and 20% Cardinals. Here are some quotes already coming out about the match up:

As nice a story as the Cardinals have been this postseason, the Eagles are operating like a team with destiny on its side.

A Super Bowl ring is about the only thing missing from McNabb’s resume, and it’s been a great sports year for Philadelphia already with the Phillies taking the World Series.

When everyone turned their back on them (Eagles), they went 3-1, took the back stairs into the playoffs with their 9-6-1 record, won a pair of games and are now 60 minutes from a Super Bowl berth.

I cant help but notice the over-confidence of our opponents. Donovan Mcbabb is coming across a little cocky the past two weeks, dancing around with the ball at Minnesota and making a telephone call in New York. Even at Bleeding Green Nation, they seem to feel like they are headed to the Super Bowl already, due to popular demand, they are looking forward to our matchup, some would call that respect. Its a lot to take in, and when the majority of the experts are all against the Cardinals, you may find a bright spot or two. Here is an interesting quote with a link to an article. This analyst is predicting the Cardinals to beat the Ravens in the Super Bowl and makes some interesting points.

Fool me once shame on you. Fool me twice? Shame on me. There won't be a third time. Arizona is going to win this game, and I'm on the bandwagon.

It is upsetting to hear about how and why the Arizona Cardinals will lose, and how the Eagles are destined to go to the Super Bowl, but it gives the team an advantage being the underdog. So far the Cardinals have emotionally fed off the underdog role and it has appeared in both games. If the Cardinals are considered the underdog and continue to receive no respect nation-wide, expect to see that same fire burning come Sunday.