The Arizona Cardinals entered the playoffs two weeks ago with a potent passing attack, an anemic rushing game and a suspect defense. Throughout the regular season the running game was hit or miss, mostly miss, but the defense seemed like the biggest liability. At times the secondary looked simply pathetic and at other times the front seven couldn't stop opposing backs from running wild. Rarely did the entire defense come ready to play and it was even less likely that they'd play well against a good offense. If we fast forward to today though, the Cardinals defense is riding high after neutralizing two top 10 offenses in the league. So what's happened? Why is this defense all of a sudden playing like an elite unit? First lets look at the stats from the regular season compared to the post season (all stats are on a per game basis):

The difference is simply staggering, especially if you consider the quality of thier opponents the past two weeks. The Falcons and Panthers were both top 10 offenses during the regular season but that didn't stop the Cardinals defense front having a great game. Back to our orginal question though, why is this defense playing so well now? There are a couple of factors to consider:

Improved Pass Rush: The Cardinals pass rush has been a hot topic for most of the season. They started out like gang busters and were leading the NFL in sacks after 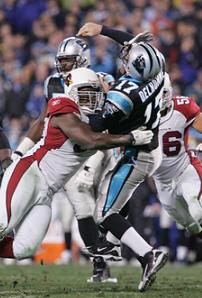 week 6, but somewhere along the way they lost their fire. Some of their struggles can be attributed to injuries as Bertrand Berry and Travis LaBoy battled various ailments throughout the season. They finished with 31 sacks on season (1.9 per game), which was good enough for 14th in the league, but in the two playoff games so far they've recorded five sacks (2.5 per game). That improved pass rush has led to multiple interceptions in both games and helped fluster both Matt Ryan and Jake Delhomme. Part of their success is also attributable to fantastic game plans by Clancy Pendergast. After questioning some of his game plans and decisions throughout the season, he's saved his best work for when it mattered the most.

No Big Plays: The Cardinals defense gave up 11 plays of 40 or more yards during the regular season, which believe it or not wasn't terrible but it wasn't great either. In the post season though, they haven't allowed a single play over 40 yards, and they're the only team still alive that can say that. The pass rush surely has something to do with that but the improved play of every member of the secondary also plays a big role. Antrel Rolle looks very comfortable at free safety, after struggling earlier in the season and Dominique Rodgers-Cromartie is the best young corner back in the NFL. His ability to severely limit the opposing #1 wide out is opening doors for others like Roderick Hood and Ralph Brown.

Offense Protecting the Ball: We talked about this during the season and it's very evident right now. When the offense doesn't put the defense in bad situations, they're a very good unit. Kurt Warner and company have only turned the ball over twice in two games and their ability to protect the defense has paid huge dividends. During the regular season the defense allowed 37.8 points per game when Kurt Warner had more than one turnover in a game but just 21.5 when he had one or fewer turnovers.

What has been the biggest difference in your mind? Can the defense continue it's great play?