Share All sharing options for: Arizona Cardinals vs. Philly Eagles: Running Games Headed in Opposite Directions

The Arizona Cardinals and Philadelphia Eagles have similar philosophies when it comes to moving the ball done the field. They both like to throw the rock all over the yard as evidence by both teams ranking in the top four in pass attempts. Both offenses are built to excel in the passing game and neither is terribly efficient on the ground. The Cardinals and Eagles were both ranked in the bottom 10 in yards per rush and yards per game during the regular season but that didn't stop their respective passing games from ranking in the top six in yards per game. Two weeks ago, as both teams got ready for a post season run, they probably didn't expect those trends to change very much, but after two playoff games their running games are headed in opposite directions. 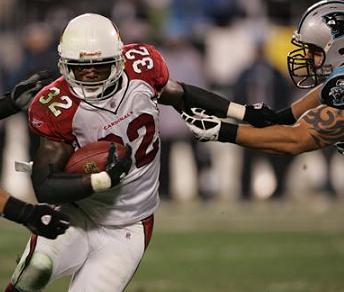 The Cardinals were the worst rushing team in the NFL during the regular season with just 73.6 yards per game on the ground. In half of the games during the regular season they failed to rush for more than 50 yards as a team and just for the sake of comparison, nine running backs in the NFL ran for more yards than the Cardinals entire team. Despite their obvious struggles on the ground, the passing game still flourished and most didn't expect that to change once the playoffs started. Through two games though the Cardinals running game is averaging 115.5 yards per game and they've had the best back-to-back games of the season. So what's the biggest difference? Well to be honest and simple, they're dedicating themselves to running the ball and they've played with a lead for most of both games. The Cardinals have averaged 35.5 attempts per game (up from 21.2 in the regular season) but they're actually getting less yards per carry (down to 3.3 from 3.5). The biggest improvement though has been their ability to run the ball late in games to kill the clock and wear down opponents. Nearly 35% of the Cardinals rushing yards in the post season have come in the fourth quarter in that quarter they're averaging just over 4.0 yards per carry. The best drive of the season just might have been late in the fourth quarter when they marched 48 yards and used up nearly eight minutes of clock time to put the final nail in the Panthers' coffin. Why was that drive so impressive? The 13 play drive was 12 consecutive runs by Tim Hightower that included three third down conversions. If the Arizona Cardinals continue to be productive on the ground, this offense is nearly unstoppable.

Philadelphia Eagles Trending Down: First, it would be unfair to talk about the Eagles running game during the post season without mentioning that they've faced some outstanding run defenses, including the #1 ranked Minnesota Vikings. The health, or lack thereof, of Brian Westbrook has also played in role in the Eagles inability to run the ball in the playoffs. He averaged 4.0 yards per carry during the regular season but on his 38 carries during the playoffs, he's averaging just 1.9 yards. His struggles are primarily responsible for the Eagles averaging just 63 yards per game in the playoffs and getting just 2.5 yards per carry. The Eagles will need more success from the ground game if they want to advance to Super Sunday.

Who's running game is in a better situation this Sunday or will the ground game even matter with these two high flying offenses?