Anyone who plays the Arizona Cardinals tries to pressure Kurt Warner early and often and very few, if any, teams turn the heat up on a quarterback like the Philadelphia Eagles. The Eagles defense has been led by Jim Johnson for the past nine seasons and Johnson is one of, if not, the best defensive coordinator in the NFL. The only other defensive coordinator who's in the discussion would be Dick LeBeau for his work in Pittsburgh. Johnson's defenses are well known for exotic blitzes and ball hawking secondaries and the 2008 Eagles have certainly lived up to that reputation. Only two teams registered more sacks than the Eagles during the regular season and they ended the season with 15 interceptions and 21 forced fumbles. The best part about Johnson's defense is that everyone is involved and eleven members of the defense recorded multiple sacks during the regular season.

Kurt Warner is no stranger to being blitzed but Jim Johnson has done a number on KW over the years. Warner's gone against Johnson's Eagles six times during his career and his stats against them are well below his career averages while winning just two of the six matchups. Warner's completed just over 52% of his passes against the Eagles and he's thrown nine interceptions to just seven touchdowns. The most telling stat though is that Warner's been sacked 20 times in six games by the Eagles and his worst game was in 2002 when he was sacked eight times. Warner will no doubt have his hands full on Sunday but he's not the only one who will be under pressure.

The Cardinals offensive line has taken it's lumps this season but for the most part, they do a good job of protecting Warner. KW was sacked 26 times this season, which is middle of the road, but the offensive line struggled at the start of the season before playing much better as the season progressed. Warner was sacked 12 times in the first four games, but he's only been taken down 15 times in the next 14 games (including the playoffs). So what will the offensive line have to prepare for this week? 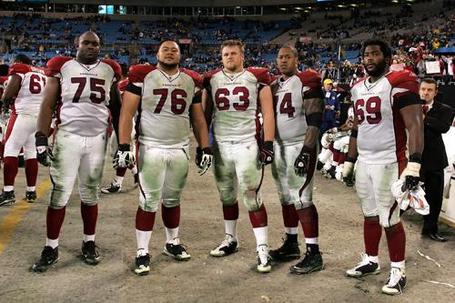 Trent Cole and Darren Howard: While neither of these guys are household names like Jared Allen or Julius Peppers, they're still a potent combination at left defensive end. Cole is the starter but Howard sees his fair share of the field as well and they finished first and second on the Eagles in terms of sacks, with 19 total. Jim Johnson uses creative ways to get both of them on the field at the same time, especially on passing downs, but one of them will be matched up on Mike Gandy on nearly every down. Gandy has done pretty well this season considering that he's faced several elite pass rushers and the coaching staff rarely gives him help with running backs or tight ends. He'll need another good game on Sunday in order to keep Warner's blind side safe.

Line Stunts and Exotic Blitzes: The Eagles test the cohesion of an offensive line like very few teams in the NFL. Johnson dreams up new blitzes on a weekly basis so the Cardinals are almost guaranteed to see something new that the Eagles haven't showed on film all season long. It will be critical for the front five to communicate pre-snap reads and work 'inside out.' Warner is able to get rid of the ball in a hurry but blitzers running free up the middle are still disruptive. Much of this pressure falls on young Lyle Sendlein and they'll need him to make the proper calls.

Overload Blitzes: Make no mistake about it, the Eagles will find a way to get blitzers running free at Kurt Warner. One of the best ways is to dial up some 'overload' blitzes (ie sending more blitzers to one side of the line than the offense can block) and the Eagles are no stranger to this scheme. Their secondary combined for eight sacks this season and long-time Eagle Brian Dawkins added another in the playoffs. Jim Johnson will throw everything at Warner to shorten the amount of time he has to go through progressions and keep the longer pass plays from developing.

Quick Trivia: Who knew that Jim Johnson started his NFL coaching career with the Cardinals and he was here from 86-93?

Only time will tell whether the 'Master of the Bltz' can get the best of the Arizona Cardinals and thier offensive line, but they'll certainly need to solid game from each member to keep Warner clean and upright. What's the biggest key for this group against the Eagles? Who's got the most pressure on them?