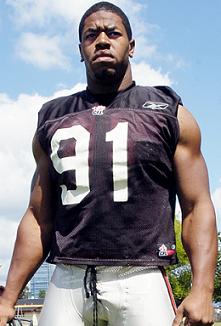 From the desk of 'odd news' the Arizona Cardinals are bringing in Cameron Wake from the Canadian Football League today for a workout. If they did sign him it would be for next season, but I guess scouting doesn't slow down even if you're in the NFC Championship game. According to Kent Somers, the Cardinals aren't the only NFL team that's interested in the former Penn State product. He worked out for the Dolphins on Thursday and has reportedly drawn interest from the Colts, Saints and Vikings.

I don't know much about the CFL or how their level of competion translates to the NFL but looking at his stats, I can see why they'd at least take a look at him. He's about to turn 27 and he's spent the past two seasons with the BC Lions. During that times he's racked up 39 sacks, including 23 this past season, and he's been the CFL's defensive player of the year both seasons, as well as numerous other awards. Wake finished his career at Penn State with 191 tackles, 8.5 sacks and 24 tackles for loss while playing mostly as a linebacker but he switched positions to defensive end once he signed with the BC Lions. He signed with the Giants after being undrafted in 2005 but was cut in 2006 (I'm assuming he spent a year on the practice squad). He's got the size to play linebacker in the NFL (6'3 240) but he's still a long-shot at best to stick with a team. Any Penn State alumns out there who've seen this guy or CFL fans?

Update: Thanks to Screen Name 20 for informing us that Cam Wake is also Derek Wake. I was wondering why I couldn't find any information on him before his time in Canada and that was the reason. Now that I'm searching for Derek Wake, we're finding out alot more information. He's obviously a tremendous athlete. In fact he owns the second highest verticle jump ever recorded at the NFL combine and he ran in the high 4.4's at Penn State's pro day. Wake was three year starter at Penn State and a team captian as a Senior. The kid's obviously a great athlete, we'll see if he's an NFL player.

He certainly looks like an interesting prospect and a low-risk investment: