Arizona Cardinals Shock the World and the Eagles 32-25

Share All sharing options for: Arizona Cardinals Shock the World and the Eagles 32-25

The 'worst playoff team ever' isn't ready to take off the glass slipper just yet. The Arizona Cardinals are headed to the Super Bowl following a seven point victory over the favored Philadelphia Eagles. It certainly wasn't an easy game, after all the Eagles are a very good team, but in the end the Cardinals made just enough plays to emerge victorious. The Cards jumped out to an early lead behind strong performances by the offense and defense. In the early part of the game, the biggest difference between the Eagles and Cardinals was that the Cardinals were putting seven points 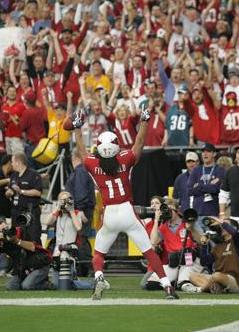 on the board while the Eagles were settling for (or missing) field goals. By halftime the Eagles had driven into Cardinals territory, and once into the red zone, but they only had six points to show for it. The Cardinals on the other hand, drove into Eagles territory three times and produced 17 points out of those drives. The Eagles mounted a furious comeback and took the lead in the fourth quarter, but the Cardinals responded with a gutsy, championship-worthy drive that retook the lead and sucked the life out of the resurgent Eagles. We'll dive into detailed analysis of the game later today but for now, here's just a couple of the guys who played like Champions:

Kurt Warner: KW certainly played like a guy who had been here before and we couldn't have asked for a better performance from the seasoned veteran. Not only did Warner finish the game with great overall numbers, he was also amazing when the Cardinals needed him most. On third downs he was 6 of 8 for 82 yards and a touchdown and on the 4th quarter drive to reclaim the lead he was a perfect 5 for 5 for 56 yards (and he threw to Ben Patrick to complete a two point conversion). By the end of the game, he'd completed 75% of his passes for 279 yards, four touchdowns, zero turnovers and a sparkling QB rating 145.7. Folks, it doesn't get much better than that.

Larry Fitzgerald: What else can you say about the guy? He's simply the best wide receiver and quite possibly the best overall player in the entire NFL. For the fifth straight game, spanning back into the regular season, he's had over 100 yards and caught at least one touchdown. During the post season, all he's done is catch 23 passes for 419 yards (new NFL record) and five touchdowns. One thing that really stood out yesterday was his leadership. During the 4th quarter drive he not only caught three passes for 39 yards but he was also as animated as I've ever seen him trying to pump up the crowd and his team.

Edgerrin James: He didn't finish the game with spectacular numbers, like some of his teammates but he was productive and provided the offense with some much needed balance. He played a huge role on the Cardinals first drive that helped them put the first points on the board. He had back to back runs of 16 and 12 yards to move the ball from the Eagles' 40 to their 12 yard line. He also had a huge 16 yard reception on a 3rd and 3 early in the fourth quarter. 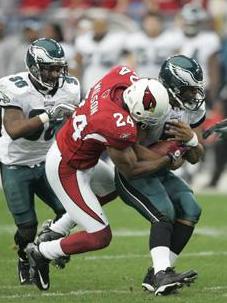 Adrian Wilson: A-Dub is finally getting a chance to play championship football and he's making the most of it each and every game. He tied for team lead in tackles yesterday with seven, recorded the only two sacks for the Cardinals and defended a pass. One of the longest tenured Cardinals had a great game when the team needed him the most.

Karlos Dansby: Dansby didn't have a great stat line, but it seemed like every time that guys were climbing out of the pile, he was right there in the middle of everything. He finished with seven tackles and batted down a pass on a third down that ended an Eagles drive.

That are countless other guys who deserve plenty of praise, including the entire offensive and defensive lines, but those are the guys who really stood. Who else had great games?