The Drive that Turned the Arizona Cardinals from Losers into Champions

Share All sharing options for: The Drive that Turned the Arizona Cardinals from Losers into Champions

At halftime yesterday, the Arizona Cardinals looked like they were cruising the the Super Bowl behind a potent offense and a defense that bent but refused to break. Leading 24-6 the Cardinals had been nearly unstoppable on offense with four scoring drives and just a single punt. The Eagles had 153 offensive yards by 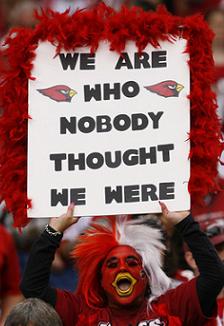 halftime but just six points, thanks to a defense that refused to allow them in the end zone. As we all know now, the Cardinals didn't cruise to a win. The Eagles stormed out of halftime and scored 21 unanswered points during the first 20 minutes of the second half to take a one point lead and as a life long Cardinals fan, you couldn't have felt anything but gloom and doom. While the Eagles offense was storming back, the Cardinals offense was stuck in a rut. They totaled 24 total yards during the 3rd quarter and had as many first downs as penalties (one). The Cardinals, not a team known for picking themselves up off the mat, did exactly that and delivered the knockout blow to the Eagles and their magical run through the post season. As I watched the Cardinals march down the field, I could help but think about a quote from the latest Rocky movie (and no, I'm not saying it was a great movie or anything):

Let me tell you something you already know. The world ain't all sunshine and rainbows. It is a very mean and nasty place and it will beat you to your knees and keep you there permanently if you let it. You, me, or nobody is gonna hit as hard as life. But it ain't how hard you hit; it's about how hard you can get hit, and keep moving forward. How much you can take, and keep moving forward. That's how winning is done.

With the game and season on the line the Cardinals did exactly what the Eagles weren't expecting. They lined up in run formations and ran the football. Now it's obvious that the Cardinals are the best team when running the ball but the dedication that they showed to the running game on this drive made the difference between a win and a trip to the Super Bowl or a loss and the start to another off season. Of the 14 plays on the drive, nine of them were runs and even though the 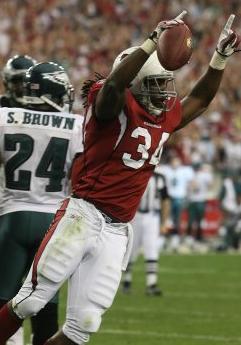 running plays only netted 16 yards, the ground game kept the Philly defense on their heels and gave Warner all kinds of time when he did drop back. The play of the game and the season came down to a 4th-and-one from mid field basically and Whiz, who's always been an aggressive coach, chose not only to go for the first down, but he chooses to pick up that first down with a running play.

I couldn't help but think back to what foos05 kept saying during the week about how Philly likes to use run blitzes to stuff the A gaps and force running plays to the outside where their defensive team speed can take control (here's one of his explanations). I'm no genius but it looked like the Eagles had most of the defense focused on the center of the offensive line and the 'stretch' play (for lack of a better term) worked to perfection. Hightower showed the patience that makes him great on the goal line as he slowly worked his way to sideline looking for a hole and waiting for Terrelle Smith to pick up a block. Once some daylight opened up and Hightower saw the corner, he simply burst forward for six much needed yards and a first down.

Who knows what happens if the Eagles stuff that running play, but I'd bet that they parlay that into at least a field goal. They'd have all of the momentum in the world and the Cardinals defense wouldn't have gotten much of a rest. As it is, we'll never know and I'm thankful for that. The Arizona Cardinals continued to march down the field featuring the running game that we all know we'd eventually need to win in the playoffs and in the end they'd march right into the Super Bowl.

As a Cardinals fan I've had this phrase burned into my brain and I'm unbelievably glad that it finally applies to us: Good teams find a way to win a ball game. For once, we're the ones making game-winning, championship-type plays. What were your thoughts as the Cardinals methodically marched down the field?